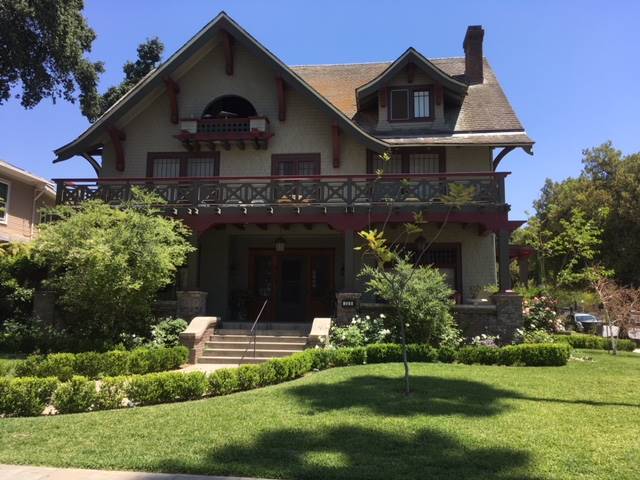 Charles Milton Brown hired Redlands architect, Fred T. Harris, to build this attractive Craftsman home in 1907. Brown bought lot 2 of the Parkview Addition in 1902 for his planned home. Architect Harris drew plans for a two-story, eleven-room home. Taylor Brothers Brick Company won the contract with an estimate of $5,000 that became $7,000 to $8,000 when completed. The Citrograph newspaper followed the construction since one of the reporters lived on West Olive and rode the San Bernardino Valley Traction Company electric street cars daily.

Charlie Brown was a true Redlands pioneer. He arrived in Redlands in 1886 after working in the raisin fruit drying business of Riverside for three years. He managed the Earl Fruit Co. for seven years and then launched a career as an independent packer, buyer, and shipper of oranges. His Golden Fruit Packing house became the Gold Banner name by 1920. Charlie made hundreds of trips to Saint Louis, Boston, New York, Chicago, and points east marketing Redlands oranges. He had contracts eventually in every state and many foreign ports.

During World War I, Charlie responded to the need for more food by meeting with the Woodrow Wilson Administration. Brown oversaw the increase of food products from San Bernardino, Riverside, Imperial, Orange, and San Diego Counties. During the Depression he found Democratic friendship with Senator William Gibbs McAdoo and members of the Franklin Roosevelt cabinet. Brown was appointed the administrator of the Works Progress Administration for Southern California. He managed to approve Federal dollars for many WPA projects in Redlands such as: Brookside Post Office, McKinley School, Mission School, Lugonia kindergarten, Orange Street Bridge, Redlands High Girl’s Gym, and ending in a crescendo with the 1940 City Hall. Brown posted a small sign in his front yard that read, “The Only Democrat in Redlands.” Charley never missed a Democratic Convention from 1896-1944.

In 1944, Charlie helped christen Highway 99 and when aviation pioneer Evelyn “Pinky” Brier landed her plane on the highway, Brown was there to give her a big kiss.

Brown married Lydia Hosking in 1896. Lydia was a native of Australia and a college graduate. Lydia was a Methodist and staunch member of the Women’s Christian Temperance Union and Charley was an Episcopalian, who drank. In many ways the marriage was of opposites. Brown often responded to the Republican leaning Redlands Daily Facts with defense of Democratic policies. His views on the Citrus industry were treated as Biblical verse and never questioned. His death in 1944 at the age of 80 was a loss to Redlands. The Facts called Brown the “most influential and loved Redlands citizen.”

Brown and his family lived at 325 W. Olive Avenue until 1939. Thomas and Minnie Muir lived here from 1947 into the 1950s. Muir owned the Central Liquor Store on Redlands Blvd.

Brown made one addition in 1931 with a garage. Richard F. Lowry improved the electrical panel in 1992. Major improvements were made by Historical Society board member, Leslie Irish from 2007 to 2011 with even more extensive electrical improvements and woodwork renovation.

This spectacular Craftsman home has a steep gabled roof with swept features and a huge bell-cast gable. Prominent brackets extend along the west side second story. The home has shingle siding with decorative dragon-mouth rafters. Paneled leaded glass is found in several windows on the front porch which expands both sides of the main entrance. A second story balcony and balustrade is supported by many protruding rafters. The roof has a large dormer matching the architecture of the main house.