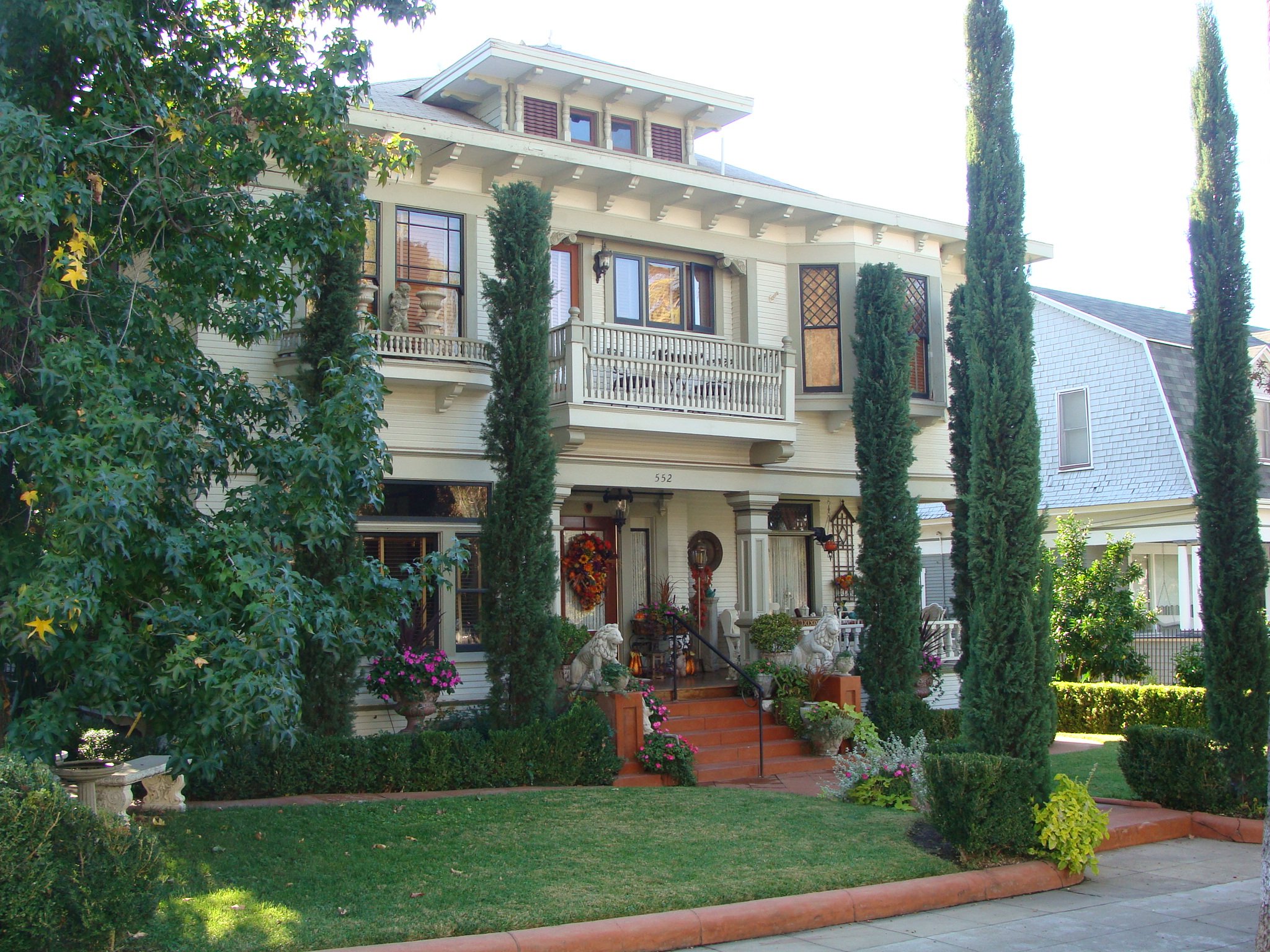 Listed on the Citrograph Building List in the spring of 1902, the two story house at 552 Cajon Street had been designed and built the previous year by Davis M. Donald for Chauncey L. Hayes at a cost of $4,500. The Italianate style house has a basic square plan with a gablet roof shape. The roof and the gabled dormer windows both have boxed cornices with carved wooden brackets. On the second floor, a bay window with diamond shaped leaded glass panes is supported by brackets. A sleeping porch which has been enclosed is centered between the bay and two double hung windows on the left. It has a small balcony with turned balusters and two scrolled corbels above the windows. The siding is false beveled, similar to clapboard, except it is three pieces of clapboard in one piece of siding. The house was built on a stone foundation and also contains a root cellar. The nine large rooms are finished in yellow pine as is the beautiful carved bannister of the staircase which opens from the hall. All the floors are oak. The original colors of the house were maroon with white trim.

Chauncey Hayes came to Redlands with his wife Minnie in 1887. He opened the first livery stables in Redlands: one at the Terrace Villa Hotel and the other on West State Street. The later was subsequently used by the Donald brothers as headquarters for their construction company. The house was the right size for the Hayes family of three sons and a daughter: Samuel, Donald, George and Algena. Samuel was a bookkeeper for Citizens National Bank on the northeast comer of Orange Street and East Citrus Avenue. Donald was a bookkeeper for the Redlands National Bank on the northeast comer of State Street and Orange Street. George established a tire store on Orange Street and Algena was a teacher at Lugonia School.

George and his wife, Josephine, lived in the house until they sold it to George J. and Naomi L. Hollenberg in 1941. Mr. Hollenberg was a professor at the University of Redlands in the Botany Department and was responsible for remodeling the house into three apartments. The apartments were rented until 1986. Ownership of the house passed from the Hollenbergs to Peter F. and Susan Jones in 1978. It was sold to the present owners, Derrill and Nancy Quaschnick, in 1986.

Derrill and Nancy were married in 1965 in Ibaden, Nigeria where they lived while in the Peace Corps. Derrill taught woodworking and math to the locals while Nancy was one of the first five Peace Corps volunteer secretaries. After their term was finished, they returned to the U.S. where Derrill obtained his masters degree in architecture. Their experience and education helped them in remodeling their previous Victorian home in Eureka, California.

When they were looking for a house to buy in Redlands, they wanted an older home that could accommodate them and their extended family which consisted of four generations. They plan to eventually turn the house back into a single family dwelling unit, but until then, they are enjoying their beautiful home.

We commend the Quaschnicks for their careful restoration of this home on an important thoroughfare in Redlands.