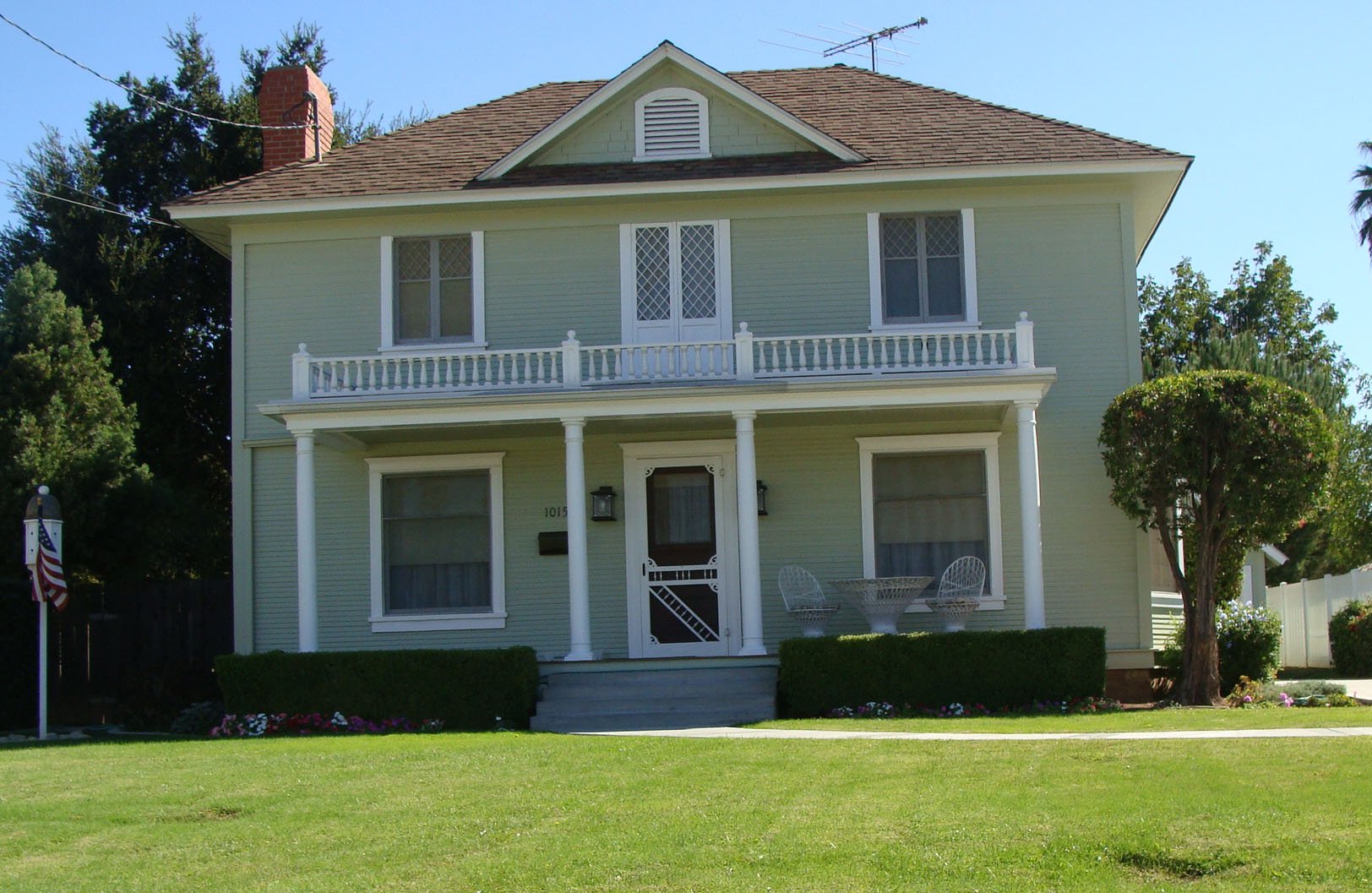 According to the city’s building permits, the eight-room home at 1015 West Palm Avenue was built in 1903 by builders Walker and Savory for Mrs. Emily F. Squires at a cost of $3,000.

Mrs. Emily Squires was the second wife of Dr. James Phineas Squires, a physician and judge. Dr. Squires brought his family to Redlands in the fall of 1887 from Austin, Minnesota in hopes of seeking relief for his daughter’s asthma. In early 1890, less than three years after his arrival and shortly after his appointment as the first postmaster of Redlands by President Benjamin Harrison, Dr. Squires died. Emily Squires and her two children, Victor and Helen remained in the family home at 711 Chestnut (1978 Heritage Award). Squires chose an area outside the Redlands city limits to build a new home in 1903. The address was 615 West Palm Avenue. As the city limit extended, the address eventually became 1015 West Palm Avenue.

The simply-designed, 2-story home sits back from the street behind a well ¬manicured lawn. The Classic Box structure has a hipped roof of composition shingle with a front-facing gabled dormer. The exterior walls are covered with clapboard siding, and are supported by a raised concrete foundation, replacing the original foundation, which was altered during an extensive restoration in 1964. The tall, brick chimney on the left side of the house was moved from a previous interior position. There is a wide, wooden porch across the front of the house with a balcony above, which is supported by four large, wood columns. French doors provide access from the master bedroom upstairs onto the balcony, which is guarded by doweled wood railing.

Emily Squires remained close to her stepson, Charles, who had moved from Minnesota with the family and established his residence at Fourth and Vine Street on the present site of the A. K. Smiley Library until 1893. In 1903 he took his family to Nevada and became a prominent figure in the founding of Las Vegas. He was the editor of a Las Vegas newspaper and often wrote about Red1ands.

Helen Squires worked as a stenographer, and at one time traveled to Washington, D.C., serving as General Pershings’ secretary. Helen returned to Redlands to care for her mother and continued to own the property at 1015 West Palm Avenue until her death in 1963. She never married and was buried next to her fiance, Fred R. Waite, who had died in 1891 of pneumonia, at Hillside Cemetery.

The original small horse barn/shed was replaced by a two-car garage that matches the architecture of the house. Other extensive restoration of the property was carried out by the next owners, Warren and Barbara Petersen. The Petersens made an interesting find on the property, Victor Squires’ dental chair and tools had been left in the old barn behind the house, where he had set up his practice some years before.

The present owners, Mr. and Mrs. Donald Noyes, bought the home in 1970 from the Petersens. Since that time the Noyes have given much care and attention to the property. The inside is furnished with antique furniture, and the pecan floors have been beautifully maintained.

The Noyes are to be commended for the loving care they have given to this historic Redlands’ property.