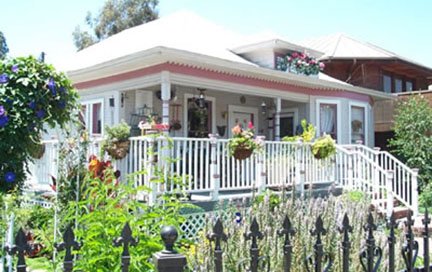 This wonderful structure is simple, two bedroom home from the late Victorian period.  The home features a low-sloped hipped roof with composition shingles, and the walls are constructed of lapped boards.

The front, or north face of the home, features a bay window made up of three double-hung windows to the right of the porch.  A door leads from the porch into this bedroom.  The front door is centered on the home with a double-hung window to the left of the door.  Under the roof’s overhang on the front of the house are decorative dentals, and a small dormer is centered in the front of the roof.  Two posts hold the roof over the porch.

The home, constructed in 1903 as a modest family residence, was built for Mrs. Francis Jackson.  Members of the Jackson family also owned the lot to the west, where Mrs. Jackson lived until this home was completed. The house remained in the family through 1938, although it became a rental in the late 1920’s.  At some point after 1959 the east section of the porch, which wrapped around from the front, was enclosed to create a small room.  There were a number of owners through the years, perhaps most notably Redlands City Council member Gary George, who used the home in 1995-1996 as the campaign headquarters for his bid for State Senate.  Kris Woods and Gayle Taylor, who purchased the home in 2000, have lovingly restored the home for an adaptive reuse as “Thyme Out” herb garden and gifts.  Necessary modifications included pouring a new foundation, widening the width of the porch, and creating a ramp from the porch along the east wall of the home to provide additional access.  The grounds around the home have been very attractively created, even reusing the bricks from the original foundation for new front steps and walkways.  The Redlands Area Historical Society is very pleased to recognize Kris Woods and Gayle Taylor for their outstanding contribution to the historic preservation of our community.