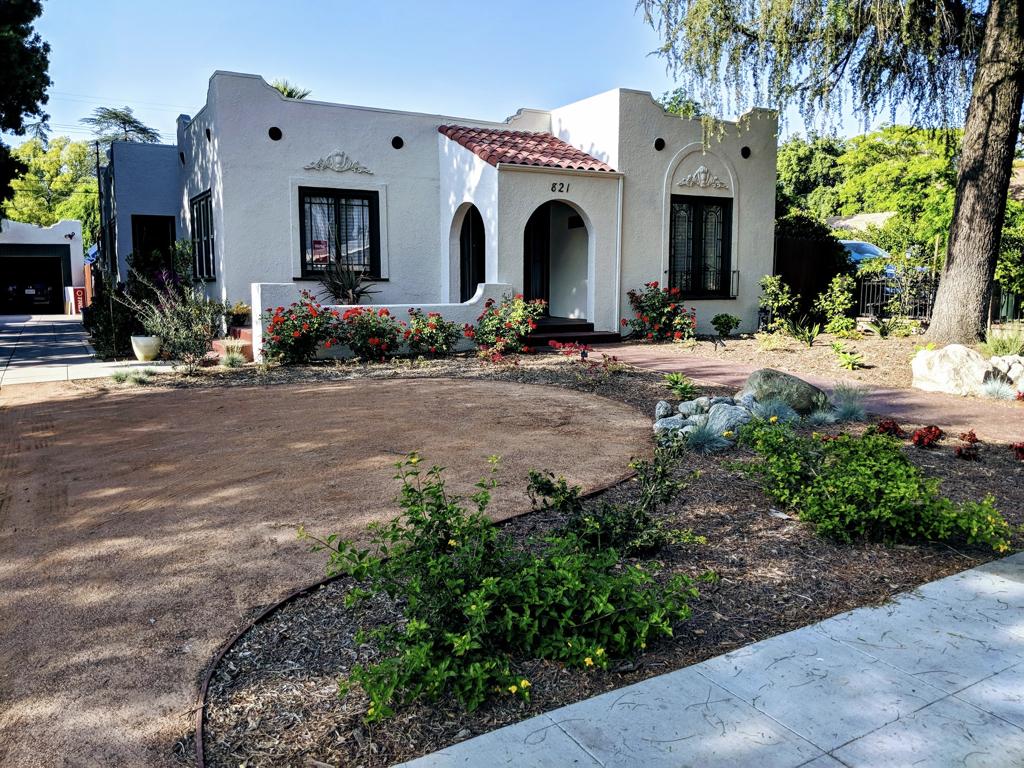 Once the house was finished, it was sold to Edgar B. & Attalia A. Van Osdel in 1925. The Osdel’s were a family of 4, with a son (Boyce Oliver) and a daughter (Harriet). Both Boyce and Harriet attended Redlands High school and then later, the University of Redlands.

Edgar B. Van Osdel was a professor of astronomy and geology at the nearby University of Redlands. He moved his family to Redlands in 1921 with accepting the position at the University. Before 821 E. Colton, the Osdels were living at 538 Cajon Street. The Osdels held many events and University functions at their Colton Avenue home. The Osdels left the house in 1945.

The house is a example of Spanish Colonial Revival architecture. It features a small central porch with front and side facing arched entries to the front yard and terrace. The porch has a sloped pitch red tile roof. The rest of the house features a flat roof with shaped parapets on the corners. Several red terracotta attic gable vent tubes or pipes are seen throughout the upper portions of the exterior walls.

Several windows adorn the back of the house and larger windows on the front. An arched window encasement on the main window features scroll ordination above it as well as the secondary front window. The main window contain curved wood muntins and the secondary windows contain square muntins. The exterior walls are covered in stucco. The garage is made in the same Spanish colonial style with matching parapets.

Current owners as of 2016 are Erin Benson and Jackie Lukeheart. They have done a great job keeping the historic character of the house intact. They renovated several rooms and areas. In 2018, the HGTV/DIY show “Restored” did additional restoration on the house, including the kitchen with period specific handmade tiles with Spanish colonial style and a master bedroom with reconfigured walls.

The Redlands Area Historical Society would like to thank Erin Benson and Jackie Lukeheart for the stewardship and care of their Colton Avenue home.