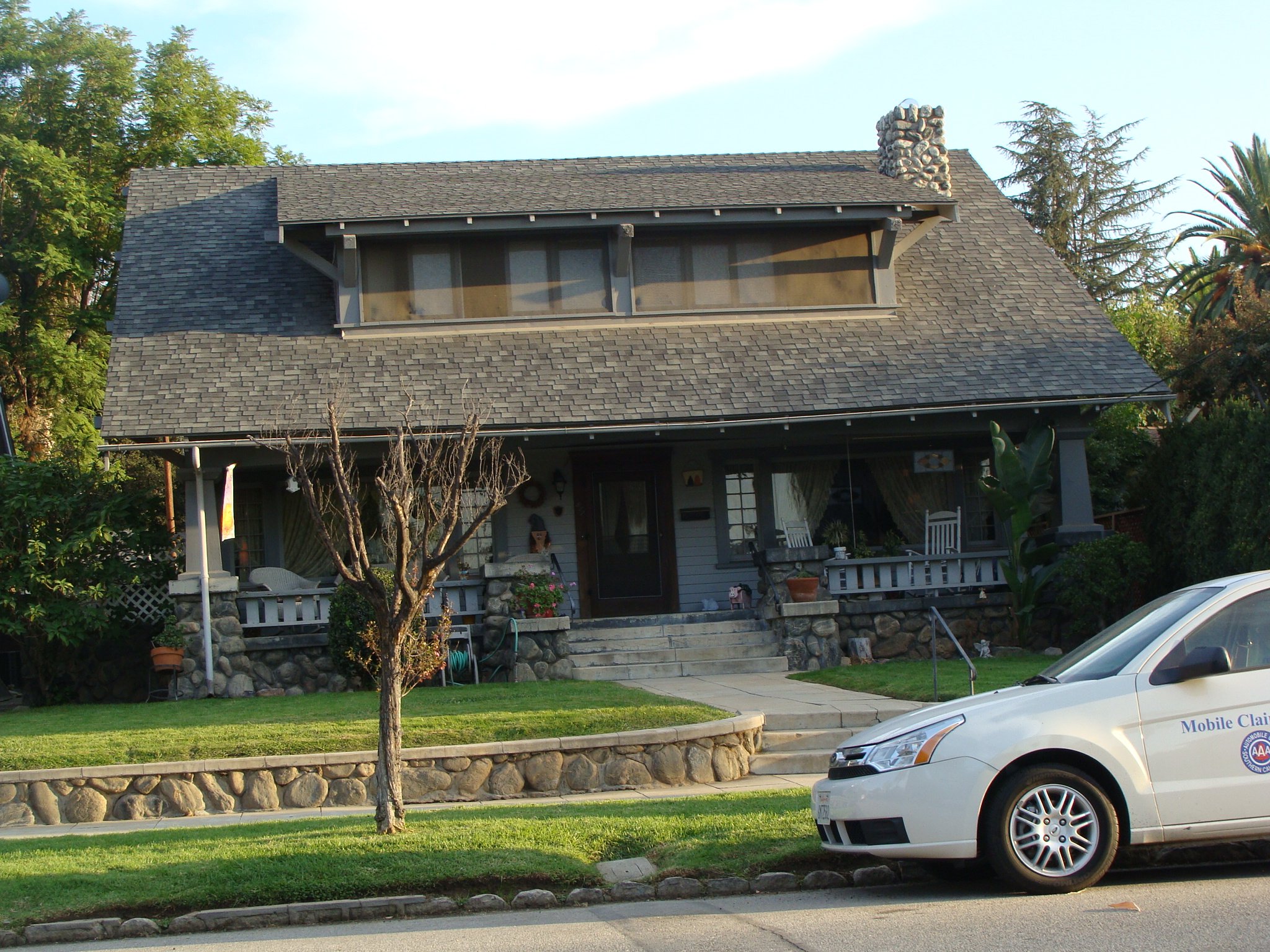 This classic Craftsman Bungalow shed style home located at 217 West Fern Avenue was first owned by Harvey C. Deming. It was designed by architect James Grant and constructed by R.B. Ogden in 1910 at a cost of $3,000. It is a one and one half story house built on a field stone foundation. Ogden and his crew brought most of the stones for this home from the Santa Ana wash at the end of Church Street. The large shed roofed dormer was originally a screened sleeping porch, but is now enclosed. An interesting feature of the upstairs bedroom is its double hung, pocket windows: the window sills flip up to allow the bottom windows to drop into the wall and the top window slides up into the wall thus changing the entire wall of windows into a wall of screens. The siding is clapboard and the concrete porch spans the full length of the house and ends with two battened wood columns on rock piers. A glass-paneled front door is flanked by two large front windows that are themselves flanked by two-by-six vertical ribbon windows. A field stone retaining wall parallels the sidewalk and original cutstone curbing is in place. The interior is trimmed in pine with numerous built-in cabinets, cupboards and bookcases.

In 1912, Mr. Deming built the Deming block located at 523 Orange Street. His popular Deming Music Store advertised selling pianos, talking machines, musical merchandise and sewing machines, The second story of the building was a hotel. That building was restored in 1990 and is now part of Vons shopping center.

The next family to own the home was J. Byron and Mahetta Vail. J.B. was a salesman for C.E. Sanborn’s real estate and insurance business located at 10 North Fifth Street. They and their daughter Edith lived in the house from 1923 until it was sold around 1939 to the Oleson family. Lewis Oleson was a watchmaker and jeweler at 14 Fifth Street and retired in 1952. While he owned the home he added the detached garage in the rear, built the concrete block wall and paved the driveway, He also replaced the furnace in 1968.

The fourth owners of the home were Wilmar C. and Ethel L. Schindler who were retired and lived there until selling the house to John D. and Kris Sooy in 1983.

The present owners, John and Kathleen Hyland, have owned the house since 1988. The Hylands like the houses in Redlands because they remind them of New Jersey which they left in 1979. They were interested in finding just the right house to buy. Unknown to the other, each drove past this house and fell in love with it. When it went on the market on a Sunday, they closed the deal on Monday. They plan to eventually expand a small downstairs area into a bedroom and add a bathroom and would like to add a carriage house in the rear.

We commend the Hylands on their loving care of this historic structure.