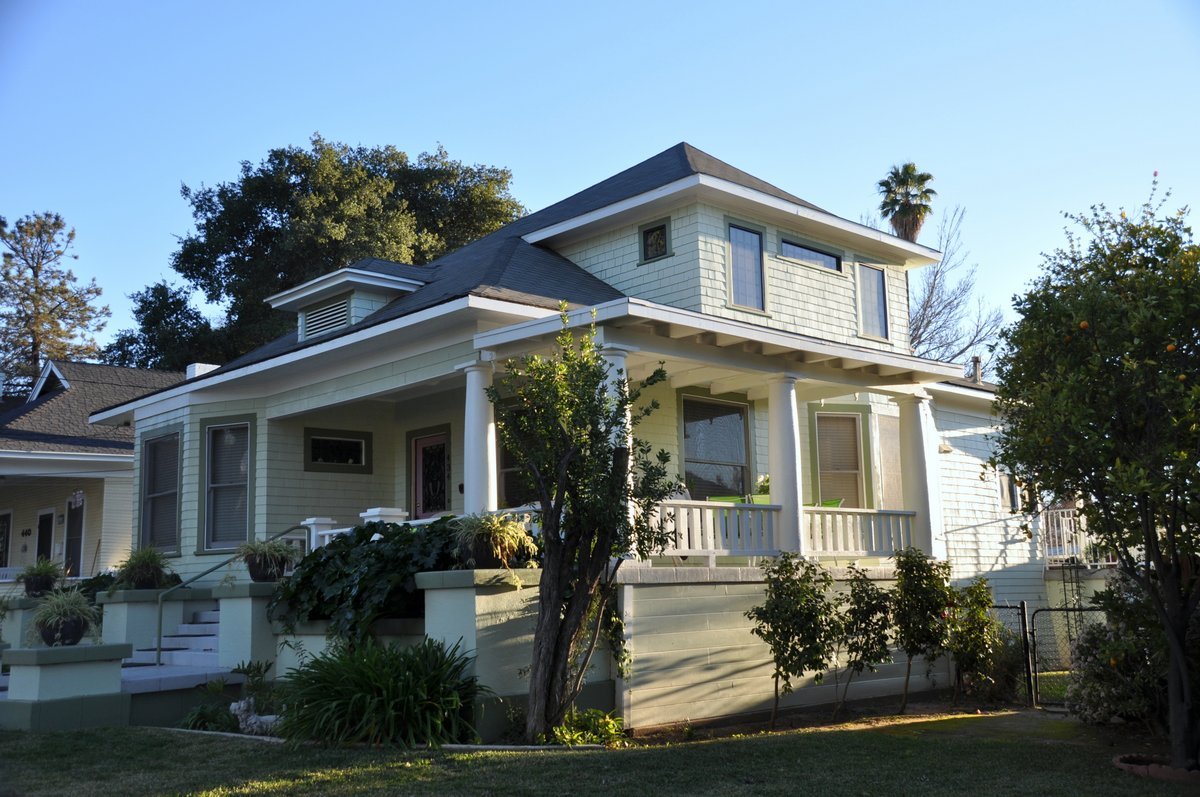 This one and a half story Victorian cottage has a belcast hipped roof. A large dormer faces east and has a vent with louvers. The siding is of wood shingles. City of Red lands assessment rolls list in 1889 a Jacob Andreson owner of ten and three fourths acres, which will later be developed in 1902 into the Lorna Vista Tract. At that time there were improvements of about $500 by 1891 improvements jumped to $1000 and in 1892 to $1200. In 1903 a Mrs. Annie Ames owned several lots in the Lorna Vista Tract but the only value registered was on lot 40 for $1200. There is also a building permit in 1903 by a C.C. Ames for a large addition of about $1800. The house was definitely there in 1903 and based on improvements a circa date of 1891 was chosen.

The recessed open porch has wide, tiered steps flanked by capped masonry. The north side of the front porch is covered by a pergola which is supported by four Romanesque columns. A stick balustrade is on the northeast comer of the porch. Windows and doors have plain trim, and a common window is double hung. There are two bay windows, one in the front and one on the north side.

After the Ames purchased the property in 1902 it changed hands several times until 1911 when Alexander Keating and his wife Emma bought the property. He was an orange rancher. The 1925 city directory just lists Emma Keating now a widow of Alexander. She remained in the house until 1959 or 60. In 1960 directories list an H.E. Sturtevant. In 1961 Redlands City building permits, show him taking out a permit to add to the back of the property a carport and an addition to the back of the house for a bath, porch and enlarging the bedroom. Other owners were: Philip Revels – 1967 to 1974, Frank Bennett ¬- 1975 to 1976, Steve Ordos Jr. – 1976-1989.

The current owner, Margaret Kirkpatrick, purchased the home in 1989. She takes pride in her house as you can tell by the landscaping and the excellent condition of the home. A few years ago the upstairs attic was converted into a sewing room. That was a big project as main beams had to be moved to open the attic space. Margaret is an excellent quilter and she needed the space for all of her projects.

The Redlands Area Historical Society is pleased to present this award to Margaret Kirkpatrick.