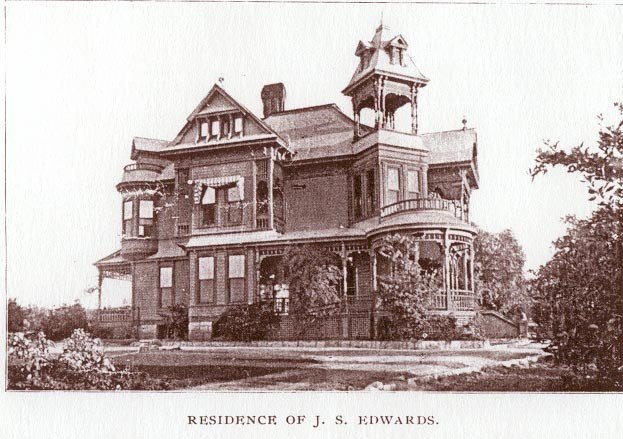 The odyssey of the James S. Edwards home began in 1890 with its construction at 919 Cajon Street on twenty acres. Mr. Edwards soon moved his wife, Alice and their children, Russell, Paul, and Ruth into the home, which remained within the family until 1957. Today, it functions as a restaurant and banquet facility five miles from its original location, providing to be an excellent example of adaptive reuse of an historic structure. 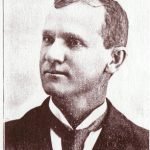 Although Edwards was one of the first purchasers of property after the preliminary map of Redlands was filed in November 1881, he did not become a permanent city resident until 1882. He was involved in several business ventures after his arrival from Illinois into the Southern California area, Spring 1881, and it was not until 1883 that he started in the nursery business, which proved to be the most profitable for him. J.V.A. Love, and, later, W. N. Chamblin entered into partnership on various projects with Edwards, including the establishment of the first fruit warehouse in Redlands in 1886. The East Highlands area became the focus of his citrus interests, which included 1500 acres of fruit bearing trees, 3 packing houses, and other industry-related businesses. Upon Edwards’ death in 1933, the Redlands Daily Facts reported “Mr.Edwards was reputed to be the owner of the largest acreage of citrus in California and possibly the world.” Edwards was regarded as a pioneer in the citrus industry as well as the respected businessman in Redlands. Mrs. Edwards continued to live in the family home until her death in 1957.

The Edwards Mansion is a 2 and 1/2 story, 14 room Queen Anne Victorian. The steeply pitched roof has multi-gables, consisting of projecting gables and open pavilions., An exceptional example of a projecting pavilion is located over the front entrance. There are recessed porch areas, pedimented and projecting dormers, adding to the asymmetrical composition of the facade. The structure is noted for its Eastlake ornamentation, which can be seen in abundance of interesting stickwork and detail of the architectural ornamentation. The textured wall surfaces are composed of wooden fishscale and diagonal shingles and horizontal siding. All of these elements and forms combine into an exuberant visual display, common to the architectural style. The future of this magnificent home remained uncertain after Plymouth Village, a retirement community for missionaries and religious workers decided to relocated in 1972, having occupied the structure since the early 1960’s. The structure was just a shell and faced demolition in 1973 when Donald Wilcott purchased it for $1.00. Mr. Wilcott wanted the building to become a focal point of a planned project near the recently completed San Bernardino County Museum. Redlands watched as the house, striped of much of its trim, was literally cut in half, maneuvered onto trailers, and moved through the city’s streets to its new location. The structure was carefully put back together and restored by Mr. Wilcott and his wife, Sue amidst its new setting of orange groves.