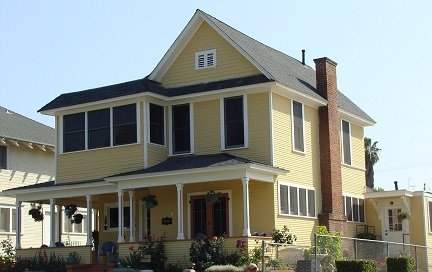 John E. and Eliza Hollett had their Eureka Street home constructed in 1899 for $2500. John made an exploratory trip to Redlands in 1896 promising his Indiana neighbors not to buy land in California. Before leaving Redlands the Remington, Indiana hardware man bought a lot on Eureka Street and a twenty acre orange grove. He made several trips back and forth before moving into his Redlands home with Eliza and student daughter, Bernice.

A.K. Smiley Library was built in 1898 and Smiley Park was extending towards West Olive Avenue. The neighborhood around the library blossomed with the Ladd’s Addition subdivision in 1896.

John Hollett remarried in 1915 and is listed in the directories with Laura A. Hollett. John died in the home June 5, 1921. He was noted as a successful and progressive orange grower. Laura moved from the home in 1922 selling to James S. and L. H. Dean. Dean was a dentist. In 1936, Mrs. Dean and Peter Spanos are both listed in the city directory. Dean apparently made a partition in the home allowing for two separate units in 1932. Laura Dean was still living here in 1946.

Building permits came fast and furious beginning in 2001 with a new electrical service, roof, and footings for a second story deck and in 2009 the change from a multi family unit to a single residential home.

This two-story Victorian Farmhouse has a three gabled roof of composition shingles. On the front façade is a slatted vent located at the top of the gable. The cross facing roof has a cross gable. The brick chimney is located on the north side. The wood frame building has ping board siding throughout. Windows are single paned-double hung, and have flat board trim. The first story porch is on the east side and south façades; it is framed by a plain box centered eave line, supported by five square pillars. An enclosed railing surrounds the porch, and is also covered in ping board. A second story enclosed porch, with a truncated roof is located on the southeast corner. Three concrete stairs lead up to the wooden porch. A cut stone retaining wall adorns the front yard and four concrete steps lead to the walkway. On the northwest corner is a one story flat roof addition with an access door.

Dorie and Ralph Reeder deserve the recognition of the Redlands Area Historical Society for bringing this Smiley Park neighborhood home back to its roots as a single family residence. The Smiley Brothers looking from across the street concur.