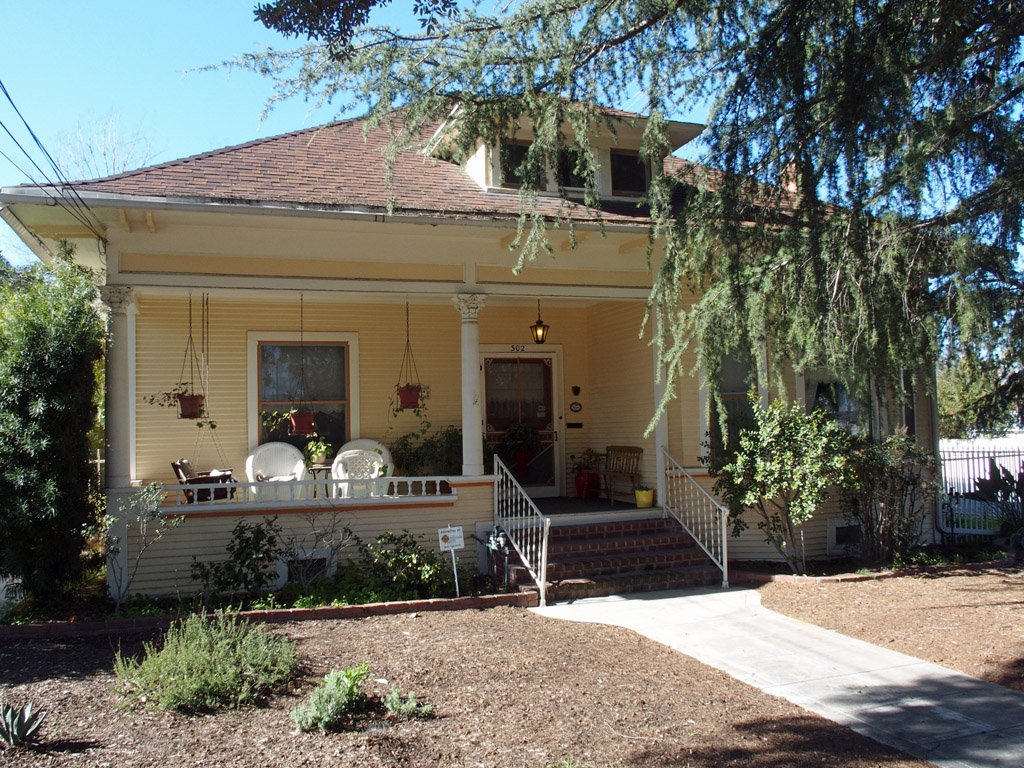 In 1903, according to the original building permit, contractor T.I Shrewsbury built the home at the corner of Alvarado and Clark for John E. Hight and his wife, Tennessee and Percy Hight, a lawyer. According to the Assessor’s Records, the family owned all of Buena Vista Tract No. 1. The Hight family were listed as “capitalists” in the city directory and were involved in real estate and insurance investing large sums of money in Redlands ventures. The Hight family stayed in the home until about 1910.

The home, located on a corner lot is a one and one-half story, pyramid hipped-roof cottage with narrow overlapping boards. There are three-windowed roof dormers on each side of the structure. Decorative roof brackets are located at the eave overhang. There is a three window bay to the right of the recessed front porch, which has a narrow balustrade railing, brick steps and classical one-story columns with decorated capitals.

According to the Redlands City Directories, George, Hugh, Isabella and, Lena Wolflin are first listed in the 1910 and would remain in the home until 1915. There were several residents from 1915 until 1925. They included W.P. Southworth, a real estate agent, his wife Fredericka, a music supervisor at the high school and their son, H. Lindsey, a student. From 1925 to about 1959, the James family owned the home. At different times, family members Grace, Alice, James, Mary, Ralph and Maurine occupied the residence.

One of the present owners, Helen Peterson, moved into the home in 1965 with her husband Clarence O. Peterson. The Petersons purchased the property in 1959, converting the structure to a duplex. Today, Helen Peterson and her daughter, Patricia Kramer reside in the home.

The Redlands Area Historical Society commends them for their stewardship of this beautifully maintained historic resource.