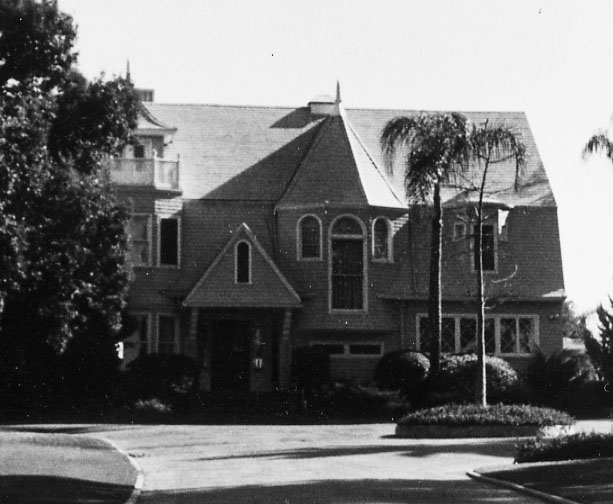 Leland Lyon married Miss Helen Hoit Lodge in April of 1895, and presented her with this home as an anniversary gift. The house, known as “Shady Lawn” because of the many trees and large lawn, was built in an orange grove in 1895. Mr. Lyon had planted the orange trees in 1888.

Built by Davis Donald at a cost of $10,000, it was a three story eleven room house with golden oak woodwork. It was heated by a coal furnace and had tow fireplaces on the first floor and on the on the second floor. In 1923 extensive remodeling was done, several rooms were enlarged, and a number were added. After Mr. Lyon’s death, Mrs. Lyon lived there until 1945. Mr. and Mr. N. Dushane Hynson (Margaret Lyon) occupied the house for several years. In 1954 it was purchased by the Carl Doss family. The Doss family of twelve adopted children have been the subject of the book and movie, “The Family Nobody Wanted”. Life Magazine also featured this family in an article.

The current owner is Dr. and Mrs. Thomas Harkness. They have relandscaped the grounds and restored the home.