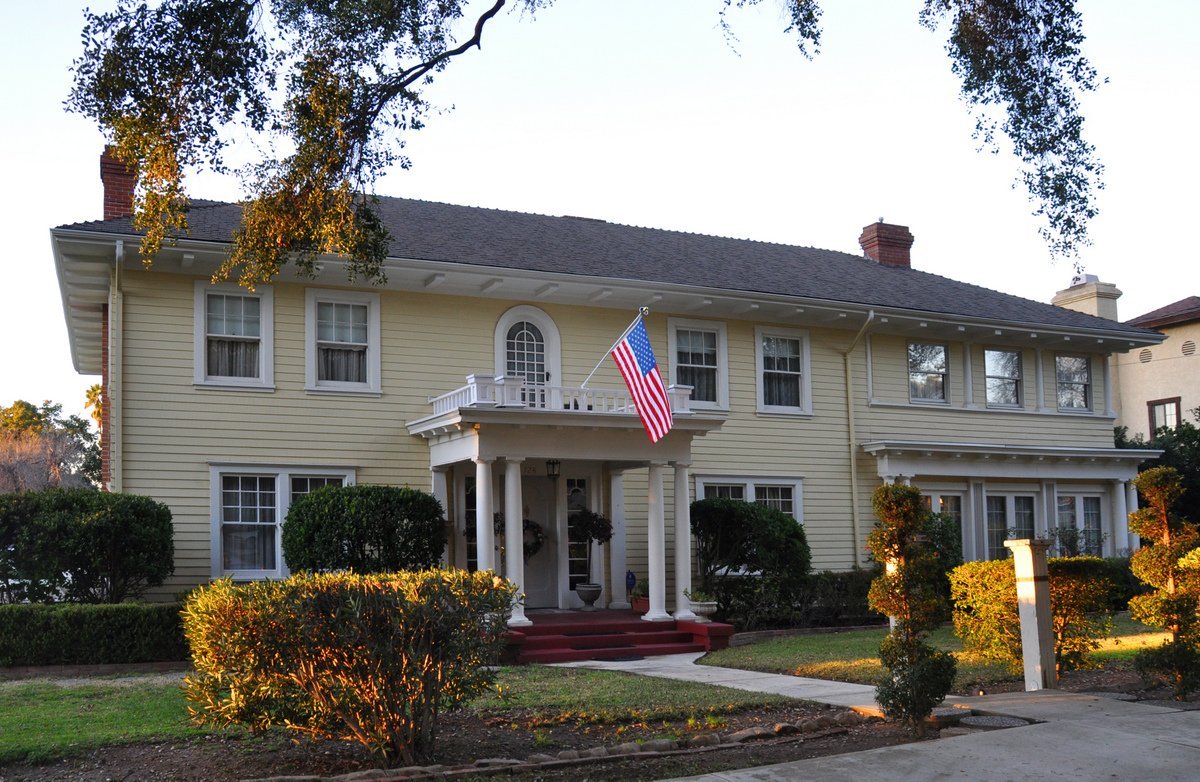 In the fall of 1908, Lucy Abbot Putnam contracted with R. C. Cunningham to construct a home for her at 728 Crescent Avenue, adjacent to her father’s property which was located at the northwest corner of Crescent and Center.

The original 44 x 40 foot, two story structure of overlapping wooden siding is a typical Classic Box style with symmetrically placed windows. The low hipped roof has projecting eaves with the rafters exposed. The classical portico is supported by Doric columns, and accenting the portico roof line is a balustrade railing with rectangular box corner posts. A semi-circular window centered between sets of windows accents the second story.

Lucy Putnam was the daughter of Charles and Margaret Elizabeth Putnam who came to Redlands in 1893 from Virginia. Charles Putnam was on the Library Board from 1895 until his death in 1918. It is not known how long Lucy actually lived in the home or if she ever did because on March 28, 1909, six months after the building permit was issued, Lucy died unexpectedly at the age of 43 from surgery complications. In her obituary, Lucy was described as prominent in musical, literary and social circles, and “probably no woman in Redlands more widely known.” She was instrumental in the organization of the Spinet.

The 1911 Redlands City Directory shows that John W. Gill and his wife Sara were now residing in the home. John Gill, who was a real estate partner with Walter E. Rabbeth, made an extensive addition to the home in June 1912. Builders Easter and Iverson added a two-story, five-room expansion on the east side, which can be differentiated from the original structure by the architectural elements of glass and columns.

A new resident to Redlands in 1927, Harold H. Nickerson, an orange grower, his wife Charlotte and daughters Winifred J., Margaret Ann, and Vesta began their residence in the home in 1929. Vesta and her husband, Phillip B. Lukei, a realtor, retained the family home from 1952 to the late 1950s after her parents moved to a new home on Sunset Drive.
The present owners are Dr. James A. Fallows and his wife Jean. In 1959 they purchased the home where they raised their four children, Jim, Susie, Tom and Katie. Having moved to Redlands from the East, the Fallows found the home reminiscent of architecture found there. This warm and comfortable home is now often visited by the Fallows’ children and their families.

We commend the Fallows for their continuing stewardship of this beautifully maintained historic resource.