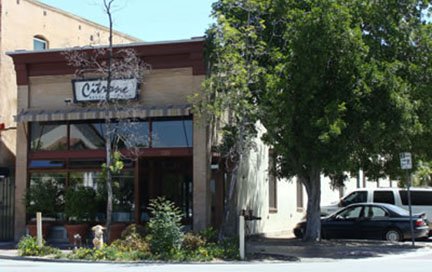 M.M. Phinney, vice president of Redlands National Bank, hired A. E. Taylor Brick Company to construct this building in April of 1902 for $3,000.  Phinney was the most prolific investor on Orange Street.  He had four buildings completed on Orange Street: The Phinney Block (Joe Greensleeves Restaurant at 220 Orange), Adair Photography & Time in a Bottle (344 Orange) and Citrone Restaurant remain.

The red brick business block has a tan plaster over the brick.  Bolt plates, a common construction component, are visible on the side of the building.  The wood frame window front was added later.  Ventilation transoms allow the breeze through the front of the structure.  Simple double hung windows, framed in bricks, grace the side of the building.  Few windows were usually placed in buildings along railroad right of way to reduce the noise inside.  The colorful awning is very much in keeping with the time period of 1902.

Before this 1902 brick block building was constructed, E. I. Martin used this lot and the adjoining railroad right of way for a citrus nursery.  Martin sold navels, valencias, lemons, grape fruit and other varieties of citrus trees.  He raised them for three years on his Crafton Ranch and then transported them to the downtown.  In the 1890s, Martin built a grocery store and home on the lot and moved his nursery business.   The two-story grocery store and upstairs apartment were removed in 1901 for the present building.

The brick block building was constructed as a furniture store.   A copper ceiling was provided in the interior.  The location was deemed perfect since the Southern Pacific Depot across the street would deliver finished furniture to the depot.  The Fine and Carlson Furniture Store opened in 1903.  W. I Fine Furniture and Second Hand Store is listed in the 1907 City Directory.

The building had the first of several remodels in September of 1928 for $2300.  The conversion was from a transfer building to a retail store.

Isaac Albert converted the building to dry goods, shoes, and ladies clothing in 1923.  Ray Hammer Men’s Clothing used the building for a time in the early 1930s.  Also in 1936, Mrs. Mary Smith sold retail liquor from this Orange Street address.  This is perhaps the first retail liquor store to open in Redlands with the end of Prohibition in 1933.  Redlands had followed a strict prohibition ordinance since 1896 and Redlanders found demon liquor an enemy to labor, the family, and Christianity.

The business block was converted to a restaurant in 1949.  However, by 1955 Gearhart Pontiac and then Golden Threads was using the building for business.

The A. J. Moscato building permit in October 1969 for $3,750 added a new lower ceiling and new store-front.    Regal Pet Shop used the building and then moved to 316 Orange Street.  Bahia Faith Center moved in 1978.  Redlands Realty Service followed the following year.   In 1985, Video Genesis owned by Charles White hung a sign above the doorway renting both beta and vhs videos.

Rod and Kathy Kierking took out a series of permits for a fire system, air conditioning, electrical, and gas between 1996-1999 in their 2400 square foot plan.

Michael and Susan Phillips purchased the building in 1999.  Building permits in 2001 for a 476-foot addition are with the city.  The Phillips’ rebuilt the counter outside the kitchen, added the bar with vintage cherry wood, built a private dining room upstairs, extended the dining room to the sidewalk and replaced the windows downstairs with efficient Pella windows that replicate the original.

Michael and Susan Phillips have resurrected an original downtown business block offering Redlands a stylish restaurant and beautifying Orange Street in the process.  Their work embraces all the reasons the Redlands Area Historical Society has deemed this building a 2010 Heritage Award recipient.