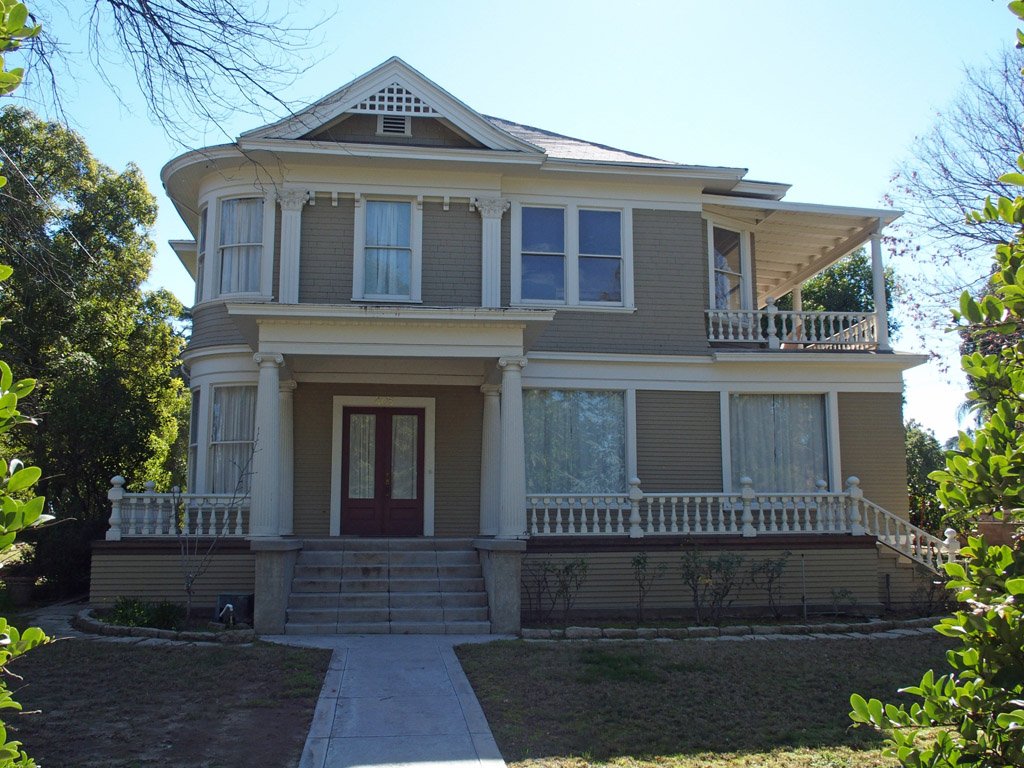 Built in 1903, this large two story classic box stands at the southwest corner of Palm Avenue and Alvarado streets. Verified by early records from the San Bernardino County Archives, Redlands City Directories and the Redlands utilities Department, the address was first listed as 205 West Palm shortly thereafter, changing to 405 West Palm. Thomas Jeffery bought the two lots located in the Residence Plat of Redlands in 1901 and construction cost was estimated at $1400 in 1903. The home stayed in the Jeffery family until after Mr. Jeffery’s death, with the city directory listing Jessie as the widow of Thomas in 1929.

This beautiful home has a bellcast hip roof with two brick chimneys. The exterior first floor has wooden overlapping siding; the second floor has wooden shingles. A horizontal trim board goes around the house, delineating the top story from the bottom. The main entry faces north with cement steps and solid cement rails. A gable dormer faces north and contains lattice work and a square vent at the peak. Under the cornices is a plain frieze. Beneath the dormer is a double hung window. Above this window, and on the frieze, with a decoration of six brackets. On either side of this window are flat pilasters attached to the buildings’ surface with acanthus leaves at the top. An open front porch with a flat roof, frame the front entry. Four Greek columns support the porch, two attached to the building, with Ionic capitals. The porch railings are turned spindles. On the second story, in the northwest corner is another porch with turned spindles. On the northeast corner are rounded bay windows on the first and second stories. Cut stone curbing surrounds this corner lot.

Past owners include Charles DeMirjyn, who bought the house from Jessie Jeffery in 1957. Mr. DeMirjyn served on the city council for twenty-eight years and was mayor for a short time. Charles and Mary Cole purchased the house in 1990. Their son, Charles, moved his business from North Hollywood to Redlands and moved into the house beginning extensive remodeling. Improvements include a new foundation, refinished wood floors, a complete remodel of the kitchen and bathrooms. Most of the walls have been replaced with drywall. Many trees and landscaping have also been accomplished.

The Redlands Area Historical Society wishes to thank Charles and Paola Cole for taking an interest in our community and commend their efforts and work.