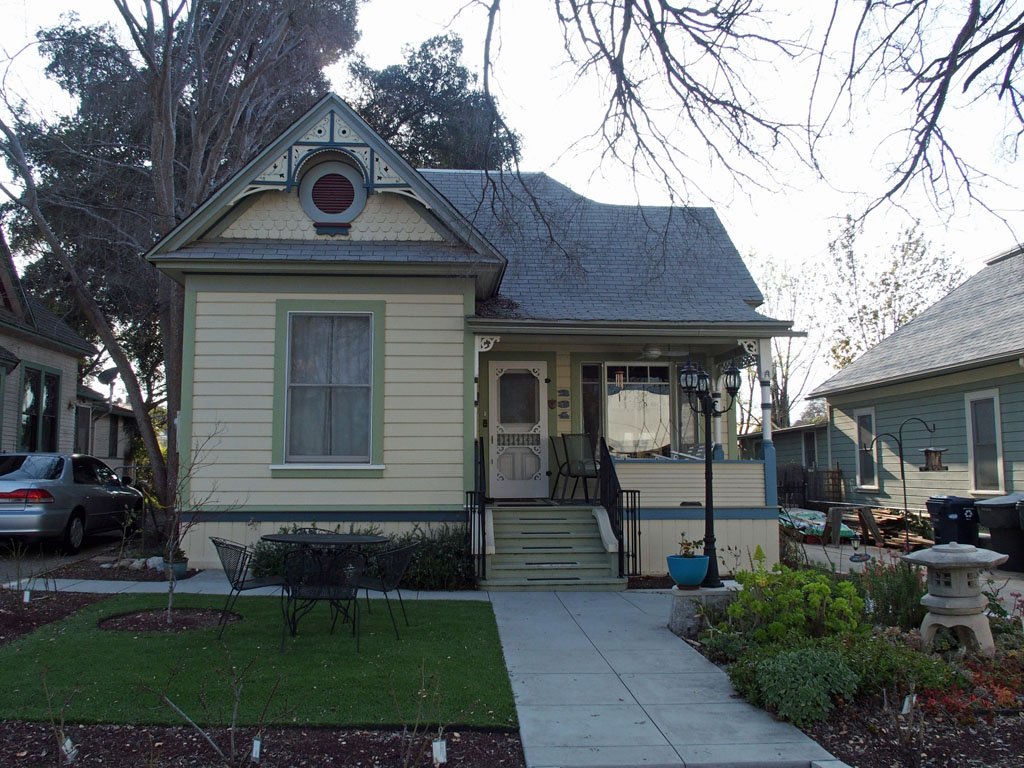 The Victorian Cottage at 234 South Eureka Street was built in 1895 and is located in the Bonnie Brae subdivision, a collection of Victorian cottages built in the 1890’s. This one ­story home has shiplap siding and a hip roof with gables extending to the front and north. There is a wide frieze and corner boards. The front gable has fish scale shingles and a circular vent with horizontal slats and ornate stick work. The side gable also has fish scale shingles and a rectangular vent. A cutaway porch is located on the right half of the front of the home and is supported by a turned post and matching half-posts are located at the wall. The porch is trimmed with decorative brackets and spindles. Within the porch are two doors and a large fixed pane window. The main door is wood panel with a solid pane window and a decorative wood screen door. The porch is reached by concrete steps flanked by wing walls with curved concrete caps. Most of the windows are double hung with flat board trim and slip sills.

This home was constructed by the firm of Lynn and Lewis, one of Redlands most noteworthy builders who also constructed the Burrage Mansion. A real estate investor, T.M. Todd, had the home built in 1895 for $1,300. Upon completion, the home was purchased by the A.F. Davis family. Mr. Davis was a carpenter and the City Directories list the Davis’ at this address through 1907. In 1910 the occupants were George H. Bender and Mrs. Julie Miller. From 1919 through 1936 Mr. John Allin, a carpenter, lived there.

In 1981, the home was among five houses in the 200 block of South Eureka Street which were designated as the City’s first historic district. The current owners, June and Robert Miller, were married in their back yard on March 15, 1992.

We commend the Millers for their commitment to this charming cottage.