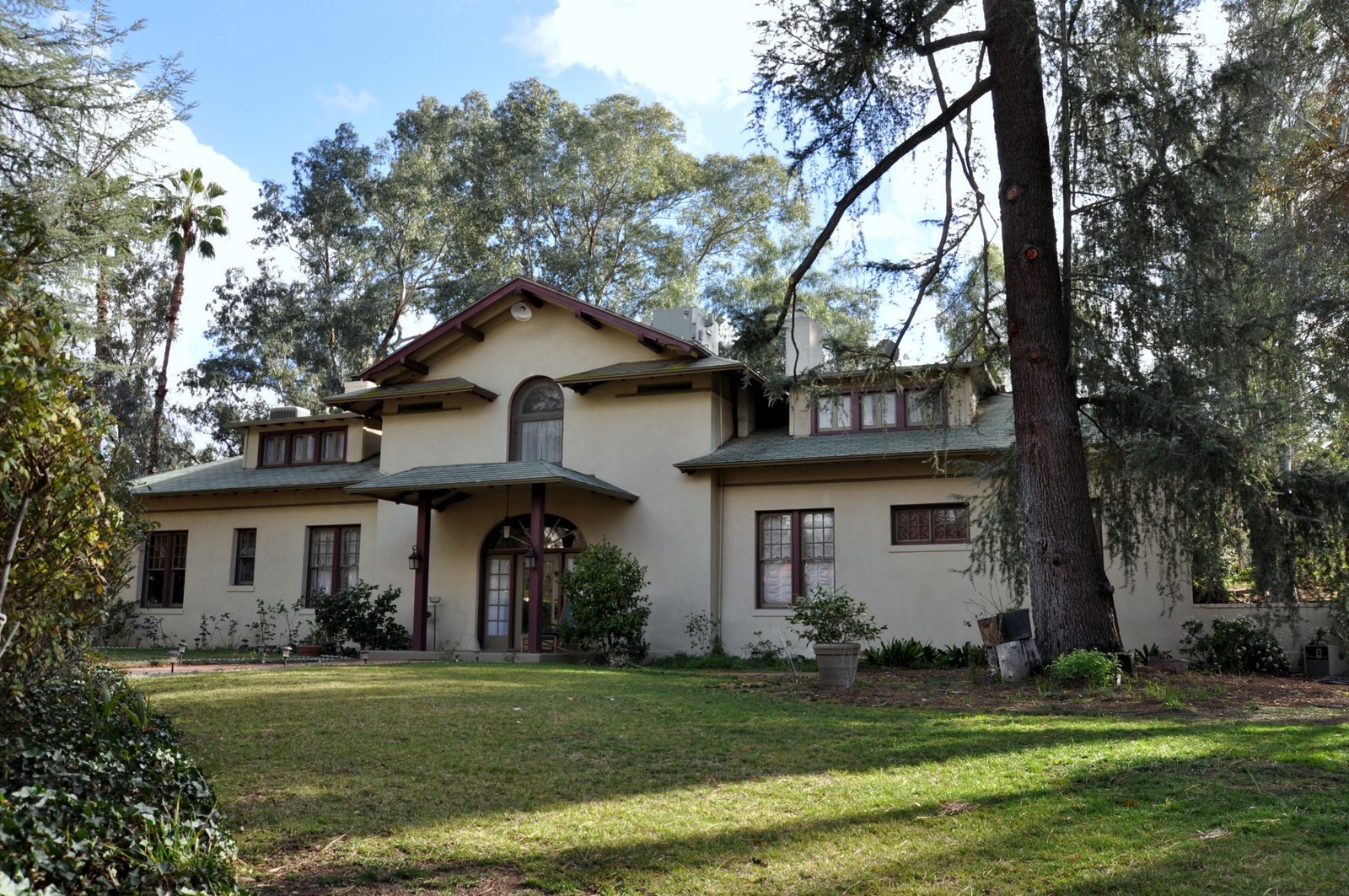 In 1908 the Phelps-Stokes sisters had their mansion on Mariposa Drive constructed. At the same time a carriage barn was built south east of the mansion and constructed out of brick and cement like the big house. The bricks came from Albert Taylor’s brickyard at the comer of Olive Avenue and Lakeside. They were transported to the building sites by the streetcar. Architects for both buildings were Howells and Stokes, he was a nephew, and the builder was J.E. Fairchild The cost was $10,000.

This two story carriage house has a low gable roof. The eaves wrap around the front of the house and stop on either side of a centered window with a half round top. One of the interesting features of this house is the decorative brackets on the eaves. The centered front door has a half elliptical transom. There is a similar transom to the back of the house. The front door is composed of one single glass pane with sidelites often glass panes each. The entrance to the carriage barn was on the east side of the building. The entrance porch has semi circular arches and the balustrade is cement

The building never housed horses or cars. Olivia Phelps-Stokes used the services of the local taxi cab company, Gus Peterson’s. Olivia’s sister, Caroline, passed away just one year after the mansion was finished. To the west of the carriage house is land that was donated by Olivia in her sisters name. It was to be called Caroline Park and be planted with native plants of this area. Her wish was fulfilled by the Redlands Rotary Clubs, the Redlands City Parks Department and donations from several Redlands residents. The first family to live in the house was that of Michael Lowe. He was the supervisor of the estate. In 1945, Leo and Dorothy Conklin bought the barn with the idea of converting it into a house. Mrs Conklin was a talented decorator. The west room of the house was where the horses were to be kept. Mrs. Conklin left two of the feed bins with chutes on either side which were used to drop hay from the loft above. They are still a conversation piece to this day. Other owners were: In 1949, Frank and Muriel Culver, 1954, Keith and Dorothy Reese, 1957, Fred Arth, 1959, James and Billie Daniel.

The Daniels saw a newspaper advertisement in the Redlands Daily Facts on October 8,1959. It described the house and area almost poetically. They fell in love with the house at that time called the Pink Palace. The previous owner loved the color pink. The outside was pink and they even painted the living room fireplace pink. It took the Daniels a very long time to eliminate the pink, but they did. Over the years and with much love the house has gone through some remodeling, but the basic structure is still there. The Daniels knew the carriage barn was a perfect place to raise their children. In the country but not too far from schools and stores.

The Redlands Area Historical Society wishes to thank James and Billie Daniel for their love of this property.

Researched and written by Karen Flippin.