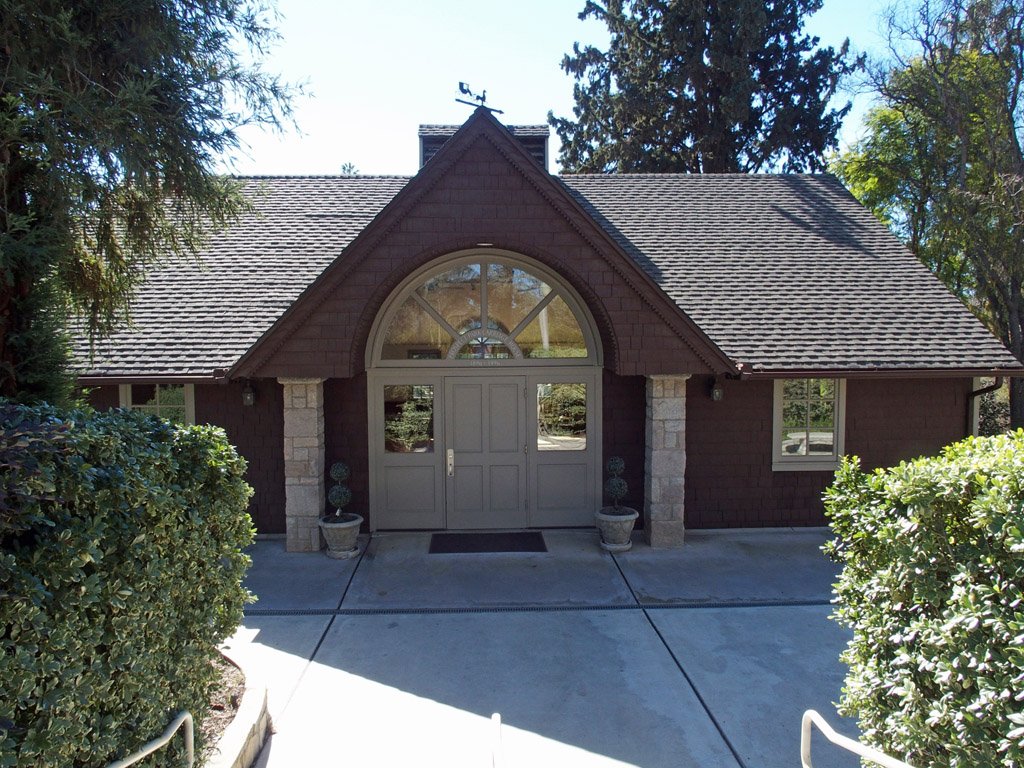 Thomas Young England, resident of Philadelphia began wintering in Redlands about 1887. Thomas was a partner in his father’s leather industry in Philadelphia. On November 20, 1887 he became a Redlands citizen and a California voter. England was enamored with Prospect Hill, which led to his purchase of the “Hill” on April 4, 1896 from George W. Meade of San Francisco. [description Redlands Heights. Block 26, lot I]. With the help of the Smiley Brothers, England began landscaping the park. England built Prospect Park carriage house circa 1896 with a “Coachman’s Lodge” addition to be used as an apartment while supervising the improvements of the park. This improvement included cut-stone walls and curbs and drives constructed with many turns, allowing limited views of the plantings within the park. The turns provided the visitor with a surprise around each corner. According to the 1897 tax records, $1800 of improvements was assessed on the property. This probably indicates that the carriage house was built during the previous year.

The carriage house represents a split-level structure with a high gable roof. The siding made of redwood stained wood shingles with end boards at the building’s comers. The foundation is made of rock. In the downstairs museum one can view the rock walls. When England purchased the property it was deeded to his wife, Emma Clarissa England, maiden name Combs. Emma and Thomas were married in 1862 in Philadelphia and gave birth to three children: a son, James William; and two daughters, Martha E. and Clarissa E.

On the backside of the carriage house two more gables appear. All of the gables have a saw tooth frieze. Decorative wooden vents appear on all four sides of the building. The backside has a transom similar to the front door only a smaller pediment over second story window. Under decorative vent in back, two sash windows with set of double hung windows on either side. The back of the carriage house roof edges project around the portion of the building that contains the gable that acts as a pediment. On South side, two side upstairs double hung windows exist. North side under decorative vent, two sash windows with a half moon transom above. Two double hung windows on each side of the two sash windows.

The Citrograph newspaper reported on December 24, 1898 that “Mr. T. Y. England of Philadelphia. has accepted plans and specifications for an elegant residence, to be erected on that most beautiful and commanding of all building sites, Prospect Hill, Redlands.” This residence was never built.

Mr. England died January 2, 1906. The family owned the property until June I, 1934 when Fred A. Hill purchased the property for $18,000 from the estate of Emma Clarissa England. Some time between 1918 and 1919 citrus trees were planted in Prospect Park. A tax assessment of $700 in 1919 indicated commercial groves. Friends of Prospect Park acquired the park from the Hill heirs in 1968 donating it to the city of Redlands. The citrus acreage provides revenue for the city today. The carriage house was completely refurbished for multiple use in 1997 by the Friends of Prospect Park. At that time a cupola with horizontal vents and a weather vane on top was added for appearance. The windows and doors were reproduced to match the original. Note the two decorative bird feeders high on the front of the building. This was a Pennsylvania custom before the turn of the century. These feeders existed on the original structure.

Researched and written by Liz Beguelin.