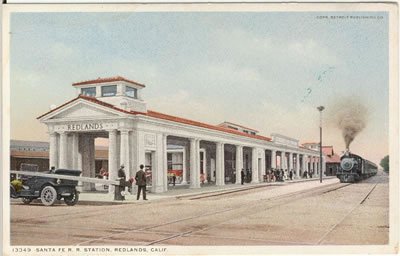 The Redlands Santa Fe Railway Station was constructed adjacent to the railroad tracks on Orange Street in 1909-1910. This Classical Revival building was designed by Arthur Brown Jr., one of America’s great classical architects who also designed the San Diego train depot, San Francisco’s City Hall and the Coit Tower, and the Pasadena City Hall.

The depot combines Classical and Spanish elements such as columns and red tile. The building features a colonnade with 36 Doric columns evenly spaced in pairs supporting a gable roof intersected by three short towers. The ends and center of the colonnade have heavy concrete piers. The roof is trimmed by a decorated box cornice with molded concrete reliefs of vegetable themes. The east end of the station features a large bay with windows facing the track. Two pairs of Doric columns frame the end and the boxed cornice features a concrete sign that reads “Redlands.” The west end of the depot contains a warehouse and storage area. A new building was recently constructed to connect the station with the old Chamber of Commerce building to the south. Future plans for the site include a restaurant and offices.

Train service to Redlands began in January 1888. The original train station was a wood frame structure finished in July 1888. In the early 1900s the Redlands Board of Trade (later the Chamber of Commerce) began to pressure the Santa Fe Company to build a new, more stately depot. These efforts were successful and Arthur Brown Jr. was commissioned to design the building. A building permit was issued July 20, 1909 to F. O. Engtrom, a contractor from Los Angeles. The structure was built of reinforced concrete with a brick floor for a cost of $32,000. Employees moved into the new building in April 1910, although it was still lacking paint. Daily passenger service continued until March 2, 1938, when a flood washed out the Mentone trestle, severing the loop.

The Redlands Santa Fe Railway Station is designated a County Point of Historical Interest and a City of Redlands Historical Landmark. It is a contributing structure to a National Register Historic District.