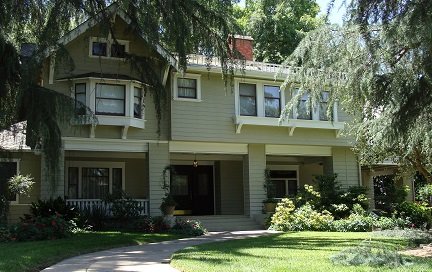 Steven and Joan Smith were already enchanted with their south side neighborhood when they first viewed the beautiful Craftsman they purchased in 1988. Local builder Davis Donald constructed the two-story, nine room residence for Miss Mary Bridgham Hill in 1909. By that time, Walnut Avenue between San Jacinto and San Mateo had been vacated by the city, and it was on part of that property, on San Jacinto, that the home was built for $5000.

Miss Mary Hill, an artist from Massachusetts, lived in the house with her parents and their servant. Miss Hill, who was born in 1870, died in 1915 and her father passed away just a year later. Her mother, Sarah, continued to occupy the home until her death in 1925. Sarah Hill is buried along with her husband and daughter at the Hollywood Forever Cemetery.

By 1930 the house was sold to a local couple, Edward and Lottie Nickerson, who lived there with son, Douglas, and a servant. Ed Nickerson grew up in Redlands. He and his older brothers all attended Berkeley together, where Edward graduated in 1912. Douglas Nickerson graduated from Redlands High School and is pictured in the school’s 1934 Makio yearbook. The Nickersons enjoyed the home on San Jacinto for many years. Lottie died in 1943 and is buried at Hillside Memorial Park. Edward died in 1980. Douglas settled in the Pasadena area where he died in 2003, but is buried along side his parents at Hillside.

The Koch family bought the house in 1976 and sold the home to the current owners, Steve and Joan Smith. The Smiths have done extensive restoration to the property, both inside and out. Work done in the 1960s was changed to reflect the period, and structural necessities, such as foundation reinforcement, were done. The original redwood floors, trim and door surrounds in the interior were refinished. The home also contains a very early Otis elevator.

This cross-gabled, two-story Craftsman home is constructed of redwood, with a wide, brick, central chimney. Four massive square columns, continuous to the ground, support the second story and form the full-width porch. Connected by simple railing, these porch supports lead to the porte cochere, which was added in 1915. Illuminated by original fixtures, the front entry has a paneled and glass door. Sets of three windows of differing styles balance the building on both the first and second floors.

The front-facing gable is on the southern end of the building and has the triangular knee braces commonly used in Craftsman homes. It features a bay window supported by small triangular brackets on the second level, with an attic window above. Continuing along the roof line, the shed dormer with its narrow windows is visible beyond a decorative parapet. Below is a matched pair of windows accented with a sturdy beam, also with small triangular brackets.

The porte cochere includes a side entrance and another bay window. Three columns supporting the porte cochere continue upward to meet the wooden balustrade enclosing the deck above. The attic windows and large triangular braces in the side gables match those in the front.

The residence is situated on nearly an acre of beautifully landscaped grounds with more than 120 trees and shrubs. The Redlands Area Historical Society is pleased to recognize the current owners, Steven and Joan Smith, for their hard work and love of this historic Redlands property.