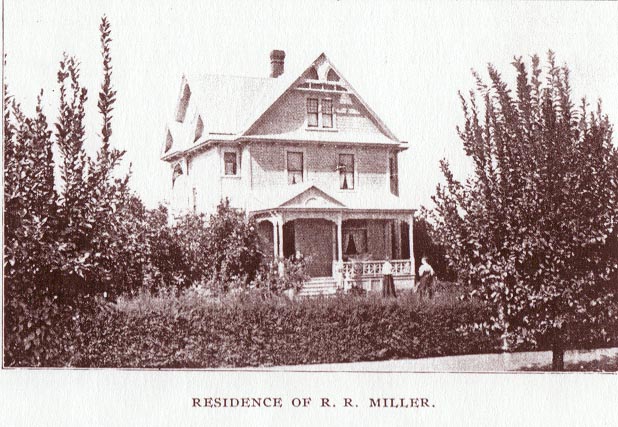 Robert Miller was a native of Vermont, having been born in Wesminister in 1832. Soon after he was twenty, he moved to Rhode Island, Illinois, Wisconsin, and Iowa. He came to California and Redlands in 1890. For the greater part of his life Miller was engaged in farming and the ownership and management of creameries. In Redlands he was devoted to the orange culture.

His home was finished in October of 1891 at a cost of $3,500. Miller subcontracted the structure to several contractors in Redlands. His plan was to get the best possible structure for the least amount of money. The firms used by Mr. Miller were Ferguson Brothers for the rockwork and foundation; Lynn and Lewis built the house frame. F.A. Shorey worked with the Seymour planing mill for decorative details and finally D.M. Donald used oak for the stairway and inside work. Lee Wilmarth wallpapered and painted the finish product.

The house was photographed for Mr. Hoogentrats, Redlands Souvenir, in 1899. Other pamphlets describing Redlands homes have shown this residence. An early water connection paper from City Hall details the fact that the home had ten rooms, one closet, one bathtub, and was two and a half stories high.

In 1915 the home was purchased by William M. Cochrane, another orange grower, who lived there until the 1930’s. In the 1960’s, the home was owned by Lt. Col. W.M. Menaker, Jr. who was going to eventually retire in the home. The home is presently owned by the James F. Carroll family.