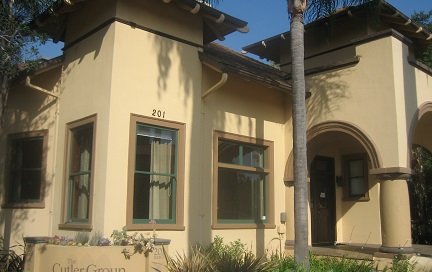 The first building on the south-east corner of Cajon and Olive was the Episcopal Church. The church was built in 1886 and moved from Center Street to this location which became known as “The Lord’s Corner.” The congregation moved again to a new church in 1904 on West Fern. The old church was demolished.

The funeral parlor was occupied the first time in February of 1905 before the exterior paint was completed or the arrival of much of the furniture. The mortuary was one of three located within blocks of the new Nordina Redlands Hospital. The strategic location placed the parlor across the street from three churches and quick gurney distance from the hospital.

The Spanish Revival plaster building was a cutting-edge design in 1905. Fred Harris designed a building with a large front doorway to allow casket entry and exit. Spanish arches grace both the 16 E. Olive entrance and the 201 Cajon entrance. Very large double-hung windows are found on all sides of the building. The square Spanish towers give the building dignity of the Mission Period of California. Formal entrance porticos are supported by short stout Doric columns whose lines lead to the sweeping arches. Tower eaves have numerous decorative brackets which match the transition from first to second story brackets. Arches have etched plaster sculpting giving yet another aesthetic texture to the exterior of the building. The Harris design is one of a kind and remarkable.

Ralph Rohrer came to Redlands in 1893 and worked for his father at the Rohrer Furniture Company for several years. Ralph studied human anatomy in Chicago and became astute with funeral arrangements. He opened his first parlor on West State Street at the age of 22 in 1896.

Arthur and George Cortner came to Redlands in 1902 and lived in a tent on Washington Street. Arthur suffered from tuberculosis so living in a tent was proscribed by his doctor. The brothers worked for F. A. Wales, funeral parlor, on West State for $6 a week. They remained partners with Rohrer until 1910 and then built the Cortner Bros. Funeral Parlor on East Olive and Sixth Street. The F. Arthur Cortner Mortuary on Brookside Avenue became their third location in 1936.

The first adaptive reuse of the funeral parlor began in the summer of 1915. The Redlands YWCA bought the building and hired H. E. Ringle to remodel it for a reading room, library, six bedrooms, chapel, gym, and tennis court for $4,000. The YWCA began in 1908 and wandered until the grand opening of their new facility October 15, 1915. Their dedication remarks were summed up in these words. “This is a Christian organization, where the physical, social and intellectual life of young women shall be cultivated and developed in an atmosphere where the spirit of Christ shall be so evident that a Christian character shall be developed, where the soul’s life shall be reached as well as that of the body and mind.”

The “Y” opened the first charm school in 1925. Slowly the school became what was known as “Cotillion” and taught boys and girls manners with the Foxtrot and other social dances. Many a young man in Redlands dressed in suit and bow tie held hands with taller young ladies the same age and avoided embarrassment weekly until the right of passage was over.

The second adaptive reuse for the building began in 2007 by Tom and Julie Cutler. Their outstanding work garnered an Adaptive Reuse Award from the Redlands Conservancy to The Cutler Church Insurance Services. A new sign was posted in 2008 followed by a major remodel of the building for $112,987. The 1938 gym was demolished along with the tennis courts and adjoining athletic areas. City requirements for parking led to the building removals.

However, Cutler Insurance was sensitive to the special qualities offered by this vintage building. Additions followed the Spanish Revival style with the arches, columns, windows and landscaping. Rose arches adorn the parking lot side of the building and flowers are abundant. The courtyard has a flower covered fence facing Cajon Street with a beautiful fountain. The front signage notes the YWCA historic location.

The “Lord’s Corner” remains a location for church oriented activities. The Redlands Area Historical Society joins the Redlands Conservancy to congratulate Tom and Julie Cutler for a building that adds so much to the Redlands environment. We can only hope the next adaptive reuse will be as good as the second.