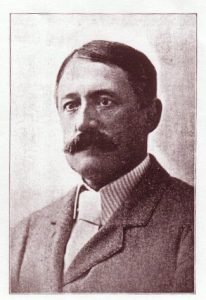 The house at 1056 San Jacinto Street might best be described as a “modified Victorian”. It is a house of many gables. Originally owned by banker, H.H. Ford and his wife, Sallie, it was sold in 1891 by Ford to S. C. Haver and his wife, Ellen, for the sum of $3,000. Early newspaper articles tell us that Haver began remodeling soon after.

Haver was a colorful and active Redlands citizen. Having come to California after fighting in the Civil War, he soon became involved in Redlands during the 1890’s. He served as secretary and general manager of the Orange Growers Association, secretary of the Casa Loma Hotel Committee, and also served on the board of directors of Redlands First National Bank and Redlands Chamber of Commerce. Haver’s stable of fine horses were well known. The Haver family enjoyed many years of residence in the home.

The present owners are Dr. and Mrs. O. Ward Swarner. The Swarner family have lived in the house for the past eight years. The Swarners named their home “Shiloh” and later by coincidence discovered that S.C. Haver had lost an arm while fighting at the battle of Shiloh.