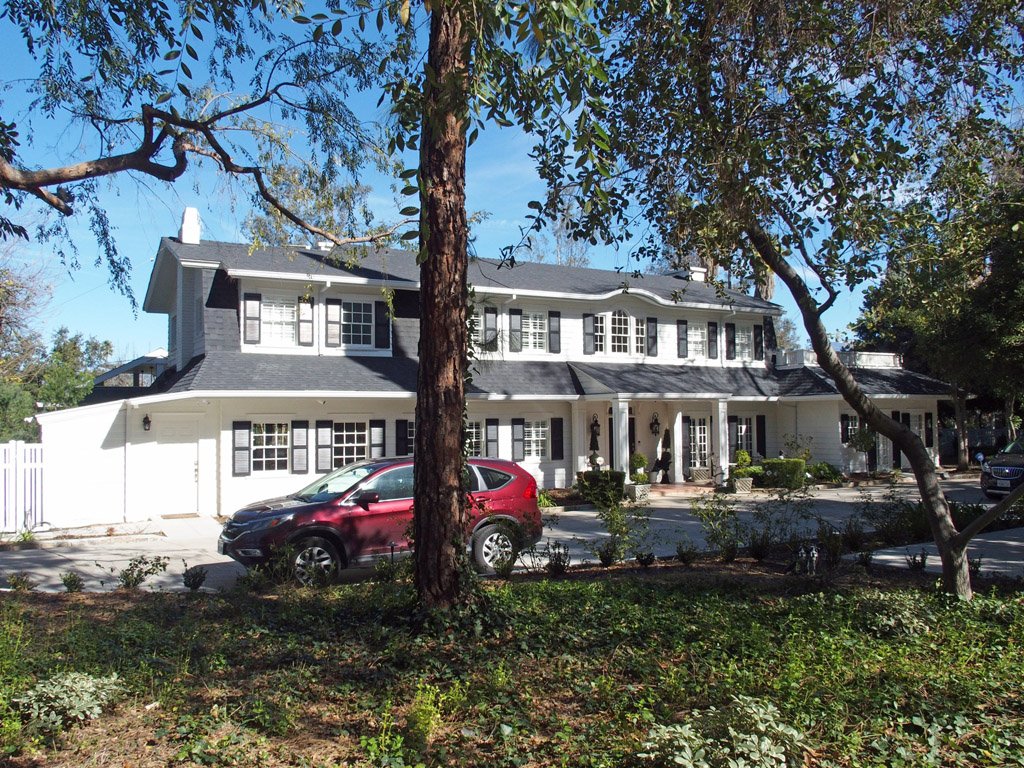 An application for building permit was filed on June 12, 1912 by Richard W. Lodge, a relative of Henry Cabot Lodge, for his $9,000 Colonial style home at 520 W. Sunset Drive, Block 7 of the Johnson’s Subdivision. The house was originally built for Lodges’ English bride who subsequently refused to live in a “southern mansion”. Lodge sold the home in 1918 to the Clarence White family of Cleveland, Ohio, which manufactured White sewing machines, trucks and automobiles.

The architect of the house, Federick Garvin Hodson, was born in New York, attended college in Massachusetts and received his architectural training in America and Europe. His style varied from early California to Mediterranean to New England Colonial. He came to California for health reasons in the early 1900’s and made his home in Redlands. Three other of his designs may be seen in the four, five, and six hundred blocks of West Highland Avenue. Hodson also designed several homes in the Pasadena area. He passed away in Pasadena in 1930.

The Clarence White family lived in the home from 1918 until Clarence’s passing in 1957. Clarence White, a Redlands philanthropist, was known for his role as a generous and public spirited citizen. He and his wife are best remembers for donating the Prosellis of the Redlands Bowl to the City. Prosellis may be translated as “before the seats”. He also donated 4,000 Belle of Portugal roses and with the help of school children, they were planted throughout the city. At his home, Mr. White experimented in the culture of iris and developed many new and beautiful varieties. The Iris Society of America awarded him several medals for his achievements.

The Colonial-style home was originally part of a complex, called “White Village” by the Whites’ friends, which consisted of separate servant’s quarters, a carriage house, a Spanish-style guest house called the “Casa”, a tennis court and an artist’s studio. Later the main house was named “Whitehill”. When the estate was sold to the Dr. Federick Jordan family of Yucaipa in 1961, it did not involve two houses on Sunset Drive west of the main residence nor the remainder of some twenty-four acres of the total estate.

The white clapboard colonial has a large entrance hall with Colonial stairway and an electric chair life to the second floor, but no longer in use. A twenty-four foot library has a skylight, built-in bookshelves, a fireplace and view windows. A brick patio and garden adjoin the library. There are also fireplaces in the living room and dining rooms, a roof terrace adjoins the master suite which has a bedroom and a sitting room. There are five other bedrooms.

The center entry has an open porch with a roof supported by rounded columns. The main entry door has a large panel of beautiful leaded glass. The French doors on the right front and have full-length louvered shutters and other small paned, double hung (sash-type) windows have similar louvered shutters all fully operational from inside the house. A Palladian style window over the front entry is emphasized by the graceful curve of the roofline. The side wing on the right front has a flat roof and stick work rail at the second floor level enclosing a balcony. Three is also a full basement in the house and the garage. The guesthouse is a Spanish style and legend has it that the reason the bars were put on the windows on the “Casa” was for the protection of one of Al Capone’s hit men while he stayed there.

In 1966, the Jordan family sold to Herbert and Helen Reuter and in 1970 William and Virginia Merritt purchased it. In 1979, Dr. and Mrs. Siegfried Kotz purchased the home. Mrs. Kotz was responsible for the extensive redecorating throughout the house including installing a stained glass window in honor of Clarence White and his famous irises. The window is located in the sitting room/library, also known as the keyhole room as it overlooks the keyhole garden where he raised his flowers. James and Barbara Gauthier were the next family to live in the house, purchasing it in 1984. Dr. Stephen and Jill Tracey, the present owners, purchased the home in 1996.

The Redlands Area Historical Society commends the Tracey family for their continuing stewardship and care of one of Redlands’ Heritage Homes.