When Dr. William M. Smith and his wife, Frances, came to Redlands to reside permanently in 1896, they bought property along a street they named Angelica, after their former hometown in New York State. They built many houses, and in November of 1901 they sold the one at 405 W. Olive Avenue (on the corner of Angelica Street) to Lillian E. Holgate, also of the city of Redlands. The price was $3,500. Angelica Street since the early 1920′ s has been called Buena Vista. 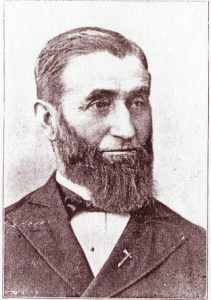 Architecturally this house is in the style of a “classic box.” Capped by a broad peaked roof it has short, broad dormer windows. A great variety of window shapes are evident on this house. Fairly symmetrical in front, the window arrangement on the side is assorted, but despite the irregularities every window is framed by a wide strip of flat wood trim. The” front door rests beneath a flat portico that extends across the house. Topped by a balustrade, “the porch columns anticipate the craftsman era of architecture and offer decoration derived directly from structure. A striking cut-stone foundation extends upward to enclose the porch that wraps around two sides of the house.

The living room contains an impressive tile and golden oak fireplace. The first floor also includes the dining room and kitchen. There are three bedrooms on the second floor.

Lillian Holgate and her husband, Arthur H. Holgate (an orange grower), occupied the house with other relatives who worked in local businesses. From 1909 to 1924 the house was owned by Mr. and Mrs. Daniel J. Car­penter. Many modern conveniences were added in the early sixties by owner Martha Bone. In 1974 the home was purchased by Forrest and Harriet McCowan who have lavished much care and concern on their beautifully preserved home.