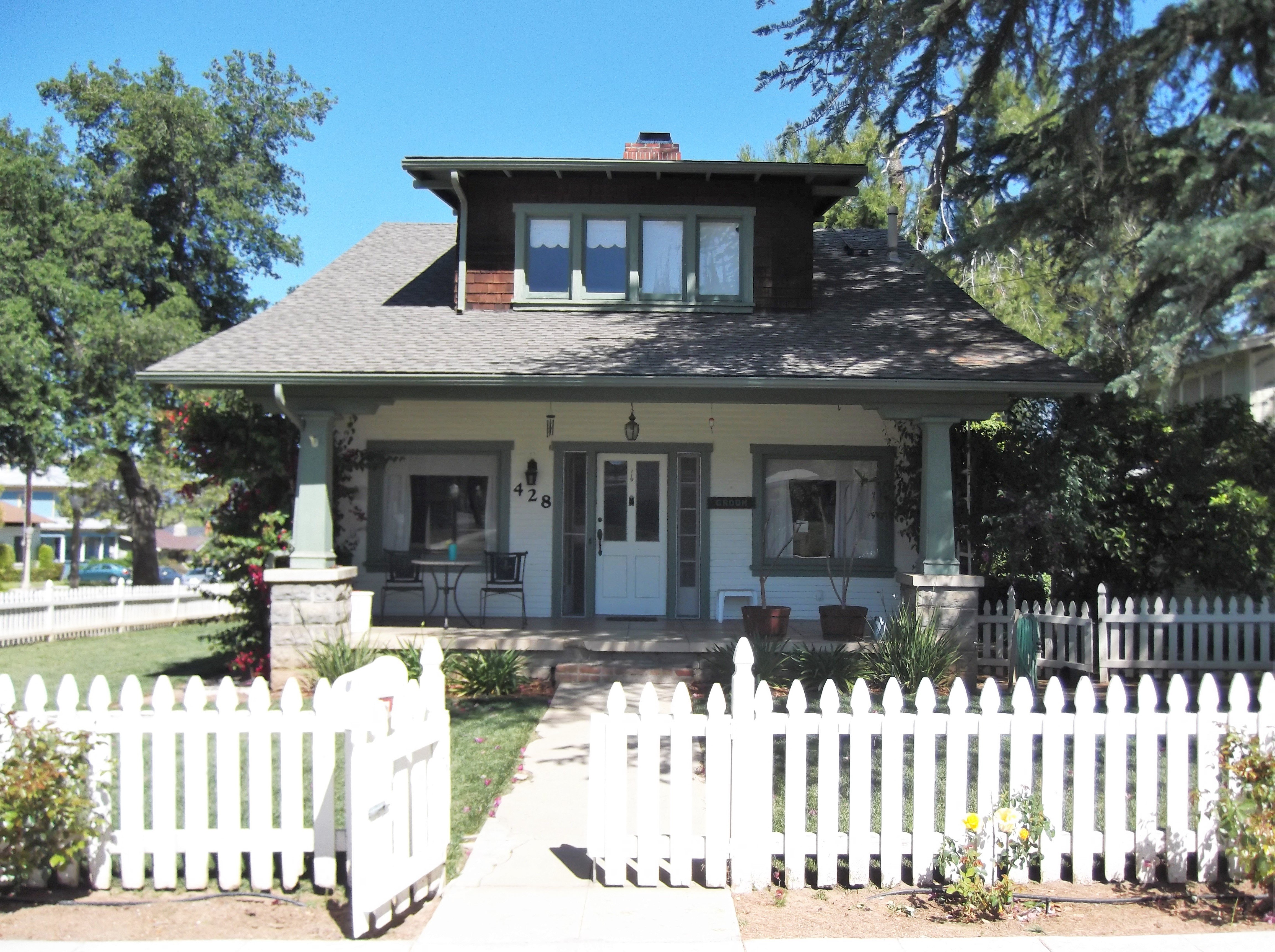 William Batty was born in Paris, Ontario Canada. His wife, Mary, was also from Canada.  He was a builder and contractor, first working in San Gabriel, Hermosa Beach, and San Bernardino before coming to Redlands. In about 1923 he began developing Buena Vista Tract #3. He chose the corner lot on Fern and Buena Vista for his home. A newspaper article of October 18, 1924, describes the development and states the “Star” house at 428 W. Fern is valued at $8,000 and will have all hardwood flooring, electric connections for all electric appliances and vents in each room for gas heating.

This two story bungalow has wood shingle siding on the top story with clapboard siding on the first story.  The foundation is very solid and attractive with the use of cut stone. Most of the windows open in allowing for good air circulation from front to the back of the house. The south facing front has a large shed dormer on the top floor which contains four windows. Under this dormer is the cement porch supported by two wooden posts with cut stone piers. The front door is centered with sidelights that open in, with two large fixed windows on either side.

The Batty’s lived in the home until about 1928, but owned the property until 1942. F. Ray Barron rented the home from 1929 until about 1940. He and JJ Meyer owned a market at 12 West State Street. In 1943 the house belonged to the University of Redlands and in 1944 ownership went to Clara B. Ford listed as orange grower in the city directory. Other owners listed on building permits were: Russell Wirtz and his wife Viola about 1954 to 1964. He was an employee at Edison Company; Robert McLaughlin, U.S. Post Office, and his wife Mary from 1965 to 1984; and from 1985 to 1995, Norman and Lanita Medina.  Norman was a dental student at Loma Linda University School of Dentistry. Tom Ferland and his wife Ann Kasunich moved here in 1998 and left in 2005.

Mary Batty died April 1, 1928. Her obituary stated, “she was a woman of great personality and made and held friends.” She was very active in the First Baptist Church. She left two daughters, one living in Pasadena and other in Toronto, Canada.  A grandson also lived in Toronto.  Mary is buried at Hillside Cemetery. William passed away July 1, 1944 and was living at 28 West Cypress with his second wife, Carrie. The obituary noted that he built several homes and apartment houses in Redlands. He was also active in the First Baptist Church. One daughter was now living in Los Angeles while the other remained in Toronto.

The west side of the building has a triangle vent in the medium gable roof. One bay window faces west.  To the north of this bay are a set of French doors which were added later, including the cement stoop and stairs. The back of the house has a shed former with three windows, a redwood deck, and a detached garage. Of interest is the enormous Deodar Cedar tree in front and a stone horse hitching post close to the cut stone curbing.

The present owner, Elizabeth Groom, purchased the property from the Ferland’s in 2005. She was a firefighter for Cal Fire and was transferred to Beaumont. She chose Redlands for the uniqueness of the city. She wanted a house with character, close to the downtown, and friendly neighbors. This home was just what she wanted. Elizabeth retired this past January and has many plans for her home. She has already replaced the plumbing and next needs to replace the knob and tube wiring. Elizabeth is enjoying not being on a schedule and just enjoying her home and community. Some original features inside are the wood flooring, the 1920s pink brick fireplace, and the kitchen cabinets. After moving in, Elizabeth found a space behind the fireplace that held a Mason jar.  It was a time capsule with photographs and letters from the Median and Ferland families. Both expressed their love for the house and wished new owners much happiness.

The Redlands Area Historical Society is very pleased that Elizabeth Groom chose Redlands and 428 West Fern for her home.