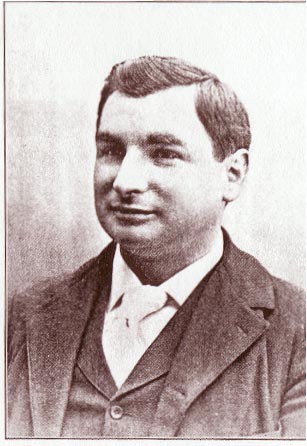 The Abbey Pharmacy, at 219 Orange street, was opened by Charles C. Abbey in September, 1894.  Mr. Abbey, the proprietor, was born in Claremont, Iowa, in 1864.  When he was 8 years old his parents came to California, settling at Livermore, where he attended the public schools and an academy.  Immediately following the death of his father he went to work in a general merchandise store, at the age of 14, remaining four years.  In 1882 he went to Benicia and engaged in the machine shop of Baker & Hamilton, remaining one year.  The Stockton Combined Harvester and Agricultural Works was his next place of employment.  In 1885 he returned to Livermore as a clerk in a drugstore, and soon afterward purchased an interest in the business.  Selling out in 1887, he went to Ann Arbor, Mich., and entered the Department of Pharmacy of the University of Michigan, from which he graduated in June, 1889.  Returning to California, he was for a short time in San Diego, but left there for Forth Worth, Tex.  As a member of the firm of Field & Abbey, druggists, he continued in business in that city until his arrival in Redlands, as above noted.  Mr. Abbey is a member of Redlands Lodge No. 300, F. & A. M., and also of Redlands Council No. 7.  He was married to Miss Emma Morison, of the same place.

When the present pharmacy first opened it was located in the Post Office block, Mr. Abbey purchasing the small stock of drugs owned by W. S. McCartney.  Very soon afterward the present location was secured, an extensive and complete stock of all drugs and druggists’ materials ordered, new and neat fixtures put in, and a first-class establishment thrown open to the public.  The store ha been generously patronized, so much so that the proprietor has recently made an extension to the main room and greatly enlarged his stock of supplies.  Mr. Abbey is essentially an investigator, and has introduced to the public many articles of his own manufacture, which are winning great popularity, and orders for which are rapidly increasing.  Especially is this true of “Skeeterine,” a valuable compound to rid the house of the troublesome pest, mosquitoes, and his cough mixture, “Expectorine,” sales of which are daily improving, and in many homes is already kept as a standard efficacious medicine which affords quick relief.  A general supply of all toilet articles and perfumes of the very best make, an exceptionally fine line of purses, and such other articles as are usually found in a first-class pharmacy, are included in his stock.  “The best are none too good” is a rule observed by Mr. Abbey in all purchases for his store.