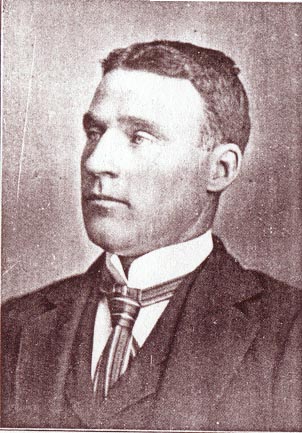 T. A. Blakely, of English descent, was born in the North of Ireland, but left home when a boy and came to the United States. He lived for about two years in Huron county, Ohio, and for four years in Clay county, Missouri, being engaged in the cattle business in the state. January 14, 1891, Mr. Blakely came to Redlands, intending to make California a visit and to return to Missouri in about a month.  But, after a residence of three days in Redlands, he purchased some property here.  He kept on making investments, so that, when the time came for his return to Missouri, he did not care to return.  He therefore sold his interests there and concluded to remain in Redlands.  Since that time his investments here have amounted to nearly $30,000, the most important being a thirty acre ranch of solid navels, which is a portion of the old Ball ranch, west of Lugonia.

Mr. Blakely is one of those who are independent of water companies for irrigation.  He has a fine well upon his property, which, at a depth of 113 feet, struck an excellent flow of water.  From this he can pump a steady flow of twenty inches.  This not only waters his ranch, but is thought sufficient to water a hundred acres, if desired.  The power is from an electric motor, which drives a double-action pump, and its workings are very satisfactory.  During the past year the power for this pumping has cost less than $30 on the thirty acres, and Mr. Blakely has water whenever he wants it, a very valuable feature of the arrangement.

August 12, of the present year, Mr. Blakely was married at Los Angeles to Miss Renee C. Malim, a native of San Francisco.  About this time he purchased a tasty residence on Sonora street, where they have their home.

In November, 1893, Mr. Blakely commenced the sale of the Woodbridge fertilizers as the sole agent for this end of the valley, of Professor S. M. Woodbridge, of Los Angeles.  As it is well known, these are chemical compounds, consisting principally of nitrate of soda, super phosphates, German potash, salt and sulphate of iron.  The use of fertilizers upon the orchard lands of Southern California is constantly becoming more and more general, as it has been plainly demonstrated that these soils are deficient in three elements of plant growth, namely, nitrogen, phosphoric acid and potash, with a possible lack of iron in a great many places.

This by no means indicates that these orchard lands are of poor quality.  On the contrary, they are among the richest and strongest lands devoted to horticulture anywhere in the world.  The design in the use of fertilizers is simply to replace the elements taken from the soil, from year to year, in the same ratio in which they are taken.  This keeps the trees in good condition and keeps the soil up to its standard of productiveness, insuring a heavy crop every season.

Those who have used these fertilizers for four or five years are among Mr. Blakely’s best customers.  The average cost of these fertilizers is about twenty cents per tree each year.  The increase in their use in Redlands is shown by the fact that Mr. Blakely sold the first year of his agency about a dozen carloads of twelve tons each; the second year twenty, the third year thirty, and this year has sold about two cars a week, which will make about 100 cars by the close of the season.  Mr. Blakely has an office in the Hotel Windsor, and a warehouse near the Santa Fe depot.