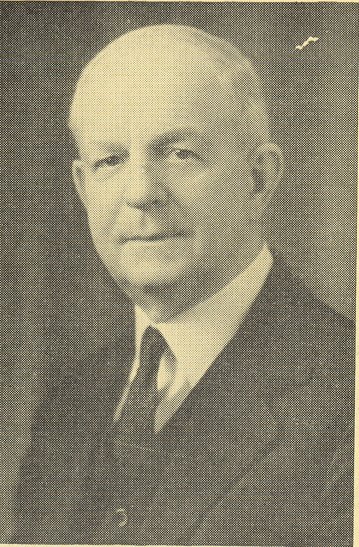 TO REDLANDS citizens the name of A. E. Brock is synonymous with public service. As school trustee, city councilman, mayor, city treasurer and state assemblyman, he has been SO long in the forefront of social and political movements for the betterment of his home city that it is virtually impossible to think of him in any other connection.

During his long and varied career in Redlands, however, he has engaged in plumbing, newspaper work, orange growing, real estate and insurance and in carrying on the work of the Federal Savings & Loan association, which he helped organize in 1906 as the Home In­vestment Co.

Greenock, Scotland, was the birthplace of Archibald E. Brock, and the date of his birth June 14, 1863. At the age of 19, he left the land of the heather and came to America ‘in the steerage, with little more than a spirit of adventure to sustain him. His first years on this continent were spent in Toronto, Cleve­land, and Omaha, In 1888 he came west to Riverside and went into the plumbing trade.

It was in 1890 that he came over to-the little community of Redlands to make his home. Soon he built the Central avenue struc­ture now occupied by B. B. Ferryman, where he operated a plumbing business for a number of Years. While thus engaged, he persuaded the city to purchase the two lots next to him on the comer of Fifth street and Central avenue for $400 each. Here the city estab­lished its fire department.

His public-spiritedness coming at once to the fore, he was almost immediately elected as the Lugonia district’s representative on the board of education. In 1898, campaigning as dry candidate from the Lugonia area during one of Redlands’ hottest wet-and-dry fights, he was elected to the city council. William Fowler, father of Will L. Fowler, was mayor.

At this period in his career Mr. Brock went into the newspaper business. Buying a half interest in the Weekly Review, he converted it into a daily. In 1900 Lyman M. King be­came his partner in this enterprise.

Finding newspaper work not quite to his liking, Mr. Brock next established a real estate and insurance firm. In this endeavor he spent many years, acquiring orange property, promoting several subdivisions and adding to the growth of Redlands by the building of more than 20 houses.

Civic duties called and in 1906 he became city treasurer. That same year he helped or­ganize and establish the Home Investment Co. Known for years as the Redlands Building Loan association, it is now operating under the new name of Federal Savings & Loan as­sociation. Mr. Brock is the only original di­rector of the association remaining on the board today.

His retirement from the office of city treas­urer, in 1910, was followed promptly by his appointment to fill an unexpired term on the city council. Two subsequent elections saw him returned to that position. In January, 1916, he became mayor of Redlands, an office which he filled with signal usefulness for 10 years. All in all, Mr. Brock served on the city council for 18 years.

Enlarging the scope of his activities, he ran for the California assembly on the Republican ticket in 1925 and was elected, serving for 10 years in that capacity. In Sacramento, as a member of the municipal corporations com­mittee, he devoted much time to the welfare of sixth class cities, such as Redlands, and was outspoken in his opposition to all measures that would result in the raising of taxes.

A life member of the Knights of Pythias, Mr. Brock belongs also to the Elks, Masons, Rotary club and Congregational church, which he has on several occasions served as trustee. A member of the advisory board of the Salvation Army, he is much interested in the work of that organization. He has long been active in the Redlands Chamber of Com­merce, the Realty Board and the Y. M. C. A.