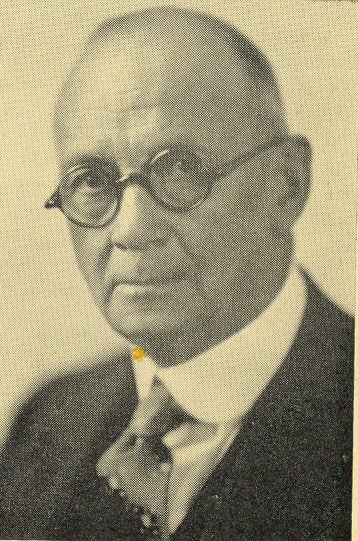 SENIOR fruit shipper and dynamic Democrat, confidant of Senators and Presidents, Charles M. Brown wields influence more widely than any other Redlands citizen. He is known affectionately as “Charlie” by friends and acquaintances who number into the thousands.

For more than half a century this staunch chief of the Gold Banner Association, the city’s biggest independent orange marketing institution, has been working for the good of Redlands. He arrived here in the autumn of 1886–two years before the city’s incorporation – as manager for a fruit firm. Since then he has endeared himself to hundreds, many of whom have been the objects of his never advertised private philanthropies.

He was born in Illinois on Feb. 12, 1864, the son of Andrew Jackson Brown and Susan M. (Wallace) Brown, natives of Kentucky. Susan M. Brown was a cousin of General Lew Wallace. In the Blue Grass state his father had been a farmer, slave owner and man of prominence in political affairs. After financial setbacks incident to the Civil War, the family went to Illinois.

Charlie attended Carrollton high school, then at the age of 16 started out for California and stopped in Pioneer county, Nebraska, where he spent three years on a cattle range. He came to Riverside in 1883 and worked three years for W. F. Coleman & Co., fruit dealers who specialized in raisins and other dried fruits.

When the firm established a branch in Redlands, Brown came here as manager. Subsequently he was manager for the Earl Fruit Co. for seven years, after which he started independently as buyer and shipper of oranges. He also formed a partnership with B. W. Cave, buying and shipping hay and grain. He has had selling agents in nearly all American states besides maintaining contacts with foreign ports.

Responding in the World war period to the Government’s clamor for heavier food production, Mr. Brown acquired extensive interests in the Imperial valley, including the growing of cotton. During the war he was personal representative of Judge Lynch, of San Francisco, who was governor of the Twelfth District Federal Reserve bank, and he was agent for the Government’s department of justice in the territory comprising San Bernardino, Riverside, Imperial, Orange and San Diego counties. He was dis­trict chairman of the Liberty Loan committee, one of the four-minute speakers encouraging subscriptions to various Federal emergency funds and was a leader in Red Cross work.

President Woodrow Wilson sent Mr. Brown a personal invitation to a conference relating to productive conditions. President Franklin D. Roosevelt has heeded his advice in similar manner and Mr. Brown is a fast friend of Senator William Gibbs McAdoo dating from the Wilson regime. He has crossed the con­tinent nearly 100 times in behalf of commer­cial and political interests.

He was married in Redlands on Aug. 17, 1896, to Lydia Hosking. This highly esteemed woman was organist at the First Methodist church for some 43 years. A son, Charles Milton Brown, Jr., was born June 7, 1898, and is associated with his father in the Gold Banner Association. He also is a prominent grower.

Mr. Brown is past master of the Masonic lodge, past high priest of the Royal Arch, a Shriner and Knight Templar. The Elks club regards him as its dean and most constant member. He is chairman of the Growers’ Advisory committee of the California-Arizona Orange & Grapefruit agency, which functions under the Federal agricultural adjustment administration, pro-rating citrus shipments among various marketing organizations.