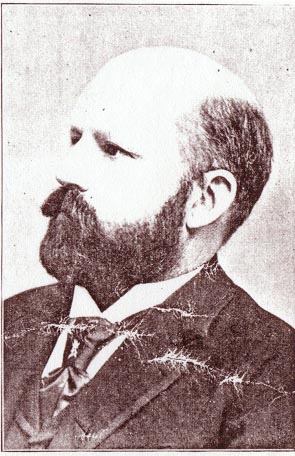 Frank Elwood Brown, formerly a member of the influential firm of Judson & Brown, is the man to whom Redlands is indebted for the conception of the Bear Valley dam and its world famed irrigation system.  Mr. Brown was born in West Haven, Conn., August 23, l856.  He was educated in the schools of his native town and at Yale University, graduating from the Sheffield Scientific School of the latter institution with the class of  ‘76.  After taking a post-graduate course in civil engineering at Yale, in the following winter, he left for California in the spring of l877.  Fourteen years later he received from his Alma Mater the degree of civil engineer for work done in the line of his chosen profession.

Mr. Brown arrived in Lugonia in April, l877.  He was employed for a time as a teacher in a little school in San Timoteo canyon. Keen powers of observation, joined with knowledge of engineering principles, soon showed  Mr. Brown the possibilities of this valley, with a sufficient water supply, and he turned his attention and thoughts to the work of irrigation.. The remarkable achievement of the building of the Bear Valley dam and the planning and carrying into execution of the Bear Valley irrigation system are recorded elsewhere in this volume.  The results are before our eyes.

In l887, Mr. Brown took a trip around the world, in order to study irrigation as practiced in older lands, especially in Italy, Spain and Southern France.  Later, with others, he started Alessandro and Moreno.  He is now engaged in building up and carrying to success the thriving colony of Lake View, Riverside county, about sixteen miles south of Redlands.  It is to the active, intelligent, persistent work of such men as F. E. Brown that Southern California owes a debt which the future will show to be incalculable.  In December, l877, Mr. Brown was married to Miss Jessie F. Smith, of West Haven, Conn.  Their family consists of eight children, five sons and three daughters.