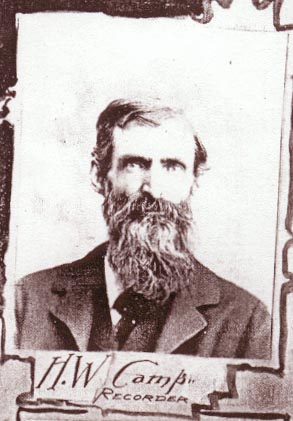 Henry W. Camp, justice of the peace and city recorder, is a native of Connecticut, where he was born, at Durham, May 18, 1842, and spent all the earlier years of his life; residing for 25 years at New Haven.  He served an apprenticeship as a car-builder, and afterward worked at the trade for eight years.  Later he was in the business for himself, in the east for four years, and then came to California, arriving in April, 1883.  He came directly to Lugonia and followed various occupations until appointed justice of the peace in 1890 to succeed Dr. Squires, who had been appointed postmaster of Redlands, although he died before entering upon the duties of the office.

Mr. Camp was appointed city recorder at the same time and has held both offices ever since.  He was married 25 years ago to Miss Sarah E. Mudgley, of New York City.  Of the four children born to them, two only are now living.  Judge and Mrs. Camp are members of the Methodist Church.  For 35 years he has been a member of City Lodge No. 36, I. O. O. F., of New Haven, and is also a member of Sassacus Encampment, and the Junior Order U. A. M.