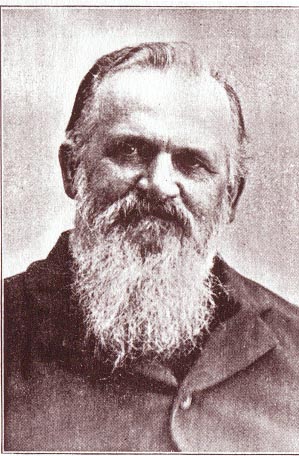 Richard Handy Chittenden, aged 61, is a native of Westbrook, Conn.  His ancestors settled in that state in 1636 and furnished Vermont her first colonial governor.  His grandfather served in the war of the Revolution.  In 1859 he graduated from Yale Law School, and then pursued the study of civil law in the University of Heidelberg, Germany.  Returning to New York and beginning the practice of his profession, when the news of the attack on Fort Sumpter was received he closed his law office, and on the 19th of April, 1861, enlisted as a private in the Seventy-first New York Regiment, and at the battle of Bull Run, his captain having been shot, led his company in a charge upon the enemy.  At the expiration of his term of service he organized Company E, First Regiment Wisconsin Cavalry, and was commissioned its captain, serving in Southeastern Missouri until disability compelled him to resign.  Proceeding northward, upon reaching St. Paul the Sioux Indian outbreak led him to take the field again, commanding the corps of mounted men who raised the siege of Fort Ripley, August 27, 1862.  At the close of that campaign he returned east, and from 1864 to 1883 was engaged to law practice in New York City and Brooklyn.  He also took an active part in politics and was secretary of the Brooklyn Reform Committee of Fifty from 1870 to 1873.  He published in 1864, an exposition of Faust, and later a translation of the same, a book of poems, and many literary and scientific papers.

In 1883 astmatic difficulties forced him to leave the East.  After a residence of about two years in Marshall, Minn., he removed to Santa Barbara, Cal., where he was stricken down by typhoid fever.  He then went to Colorado, built a log cabin in Boulder Canyon, and there alone continued his studies.  In 1889, he discovered that the surface of the earth and moon are proportional to their sidereal periods, and, having been appointed United States Volunteer Observer, first noted and reported the oscillation of the magnetic needle on the approach of a cyclone.  In 1891, he returned to Santa Barbara, and removed to Redlands in 1895, where he has continued the practice of law and astronomical researches.  Among his later discoveries and contributions are the “Septiform Polygon,” Wonderful Harmonies,” “The Last Days of the Age,” and “The Surface Period Relation.”