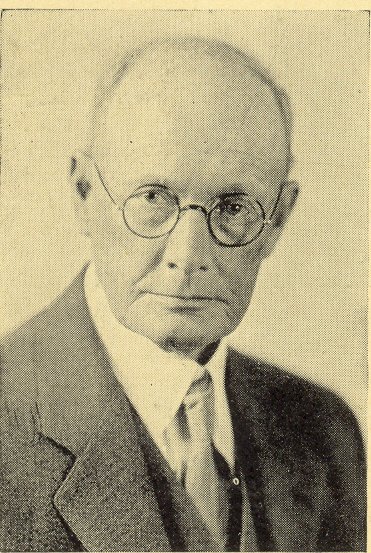 PROMINENT among Redlands pioneer or­ange growers is Fred H. Clock, who has been cultivating citrus trees since the day in 1895 that he arrived with his wife, father, mother and three brothers from Latimer, Iowa. The father purchased one of the dis­trict’s first orange groves which the family has owned ever since. At first the young men ran the grove together, but later Fred Clock bought his own 20 acres of citrus trees.

Along with the development of the citrus industry Mr. Clock has played an important role in the growth of the city’s educational system, serving as a member’ of the school board for the thirty years prior to his retire­ment in 1937. During that period nearly every present school building was erected. In his first year of service 45 students were given their diplomas – in his last year 240 were graduated.

It was in 1908 that Mr. Clock was first elected to the Redlands school board, but had previously served as a member of the Crafton group. Lincoln school and the administration building of the high school are the only two remaining structures to remind him of those early days. A third landmark was destroyed recently when the McKinley school was torn down to make room for a modern educa­tional plant.

Born in Franklin County, Iowa, in 1867, Mr. Clock spent his  early days in a typical farm district school and still believes a farm is the finest place in the world to grow up. He graduated from the high school along with ten or twelve others, in Hampton, Iowa, and attended Northwestern university for a year when he went into business with his father and brother in a general store in Lati­mer, which he continued for twelve years prior to their coming to Redlands.

Mr. Clock has spent many years serving the Methodist Episcopal church, which he at­tends regularly as a steward and a trustee. For 24 years he has been superintendent of the Mentone Sunday School. Sunday morn­ing becomes one of the busiest times of the week as he travels from his home on East Colton Avenue to Mentone to assume his duties there and then returns to Redlands in time for church.

Other important civic offices that he has held include membership in the board of directors of the Chamber of Commerce, be­ginning about 15 years ago; the Y.M.C.A. board for 10 years, including three as presi­dent; the House of Neighborly Service board since 1925; the Associated Charities board for many years and present president; the Salvation Army board and the Boy Scouts. All these organizations have Mr. Clock’s in­terest at heart. He is a past master and a life member of the Blue Lodge, Royal Arch Chapter, and past commander of the Knights Templar of the Masonic order. He is also a charter member of the Kiwanis club, serving as president one year.

Mr. Clock served with the Y.M.C.A. in France during the World war from August, 1918 to August, 1919. Two hobbies interest him greatly-photog­raphy and stamp collecting.