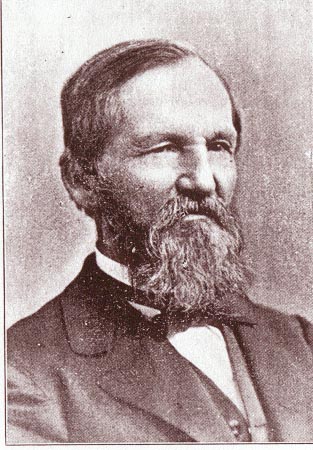 Myron H. Crafts, a  descendant in the sixth generation of Elihu Crafts, who was one of the pilgrims brought over by the Mayflower, was the first settler in the place which bears his name.  He located at Crafton in 1861, over five years before Dr. Ben Barton erected his brick residence near the Mission buildings (Dec. 1866).  Mr. Crafts was born at Whately, Mass., in August, 1816.  When thirteen years of age he left school and “struck out” to make his own fortune.  He went to New York City and was for some time a clerk in a dry good store, but eventually went into the business on his own account and was also in partnership with his brother, George Crafts.  Leaving the metropolis, he was for a number of years in business with Leonard Woods, at Enfield, Mass., where, in 1843 he was married to Miss Miranda Capen, of the same place.  They had four children, three of whom are now living – Mrs. Ellen Woods Meachem, Harry G., and George H. Crafts.

After marriage he returned to new York, where he became one of the originators of the Five Points Mission, and where he remained in business until he went to Jackson, Mich., in 1853.  After his store in that place had been burned three times, “on account of his abolition principles,” he went to Dimondale, in the same state, and opened up another store and engaged in the real estate business.  In this place his wife died, September 14, 1856.  Soon after her death he went into a bank in Lansing, which place he left to become cashier of a bank in Detroit.

In 1861 he resigned his position and came to California and to Crafton, as above noted.  He first bought 450 acres of land and gradually increased this amount to 1,800 acres.  The settlement which he created first bore the name of Altoona, but the inhabitants and visitors appropriately and unalterably made it Crafton.  In 1886 he had forty acres surveyed into lots and the town platted.  He secured a post office for the place and had other improvements in hand, when death intervened, September 12, 1886.  Mr. Crafts was a zealous worker in the cause of Christ from his boyhood, and while at Crafton taught the Indians Christina burial and was one of the prominent advocates of the Homestead Law, which would enable them to own their own lands.  He had unbounded faith in the possibilities of this valley and believed that it “would be peopled by thrifty Yankees and water would be found in abundance to cultivate the rich soil.”  He set out the second orange grove in San Bernardino valley, in 1870, and was the first man in the county to go into the bee business on a large scale.  He was very public spirited and nobly generous.  In 1864 he was married to Mrs. E.P. Robbins, who survives him and a sketch of whose life appears elsewhere in this volume.  The had one child, a bright and loved boy, who died at the age of thirteen years.