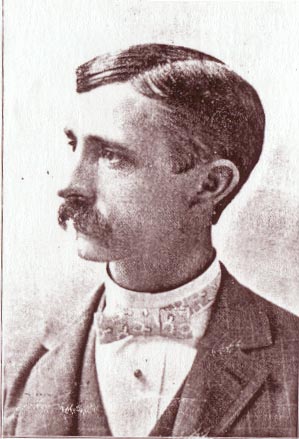 Among the business men of Redlands none have been more familiar with the development of its great industry – the culture of citrus fruits – than H. H. Daniels, who, as a dealer in real estate, has assisted in the growth of the city from its very commencement.  Mr. Daniels spent most of his youth and school days in Michigan.  At twenty he went into business on his own account in Kansas and Nebraska.  Mr. Daniels has traveled in every state and territory of the Union, with two or three exceptions, visiting nearly all the large cities.  During these travels he has always taken pains to acquaint himself with the resources, the climate and the advantages and disadvantages of each city and state visited, making comparisons and forming opinions of great value in his later business experiences.

Mr. Daniels came to Redlands from Nebraska eleven years ago.  The only real estate man here then was D. L. Clark since deceased.  Mr. Daniels opened an office on Lugonia Terrace, where R. E. McGinness’s orange orchard now stands.  After a few months he took W. E. Sibley into partnership and the firm was afterward enlarged by the association with it of L. W. Clark.  Mr. Daniels has been constantly engaged in handling real estate from that time to the present, either on his own account, buying, improving and selling, or as agent for other owners.  He also at one time was heavily interested in the nursery business, which he studied in all its details. He has built and sold twenty-one residences in Redlands, all of them creditable to the city.

One real estate venture undertaken successfully by Mr. Daniels illustrates the rapid increase in land values in the earlier days.  This was the development of Terracina Addition Number One.  George Wilson had taken 160 acres of land as a government claim, at $1.25 an acre.  Mr. Daniels purchased the tract for $10,000 cash, as soon as Wilson acquired title, laid two miles of pipes to supply it with water, graded, planted, and sold the whole tract, which now contains some very handsome navel orange groves.

Mr. Daniels has a knack of pleasing both buyer and seller in the sales of the properties which he handles.  He believes that the best property is the cheapest and is fond of selling something in which he himself has confidence, such as a fine bearing orchard, all navels, well graded and with a first-class water right.  Such properties bring incomes, and although sold at high prices, are the most satisfactory investments that can be made in this section.  His long experience and intimate acquaintance with land values and his knowledge of every detail of planting and cultivation make him an authority on these subjects.  His customers bring their friends to buy of him and frequently refuse higher prices for their purchases than the high prices which they, themselves paid, two facts which speak well for the soundness of his judgment.

Mr. Daniels’ office is in the First National Bank building, on Orange street, on the ground floor, and very convenient of access.  He keeps his own carriages for the convenience of patrons and is always prepared to show intending purchasers the finest citrus properties or residence sites in Redlands.