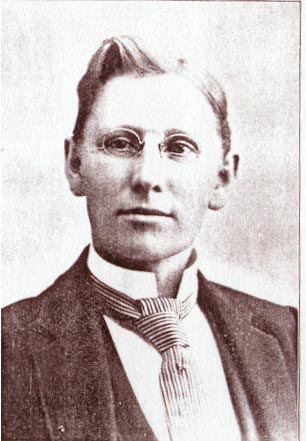 The Redlands Abstract and Title Company is now under the efficient management of U. L. Dike, younger in years than many of the business men of Redlands, put possessed of the business qualities which invariable point the way to success.  Mr. Dike was born at Cleveland, Ohio, December 7, 1864, but, six years after his birth, his father’s family moved to Kansas, where he lived until sixteen years of age, when he came to California, in October, 1880.  The family first went to Downey, where they lived for six years, and then to Elsinore, for a year and a half.  In February, 1887, U. L. Dike and a sister went to Los Angeles to attend the Woodbury Business College in that city.  He remained in Los Angeles until January, 1890, when he came to Redlands. Soon after his coming to Redlands the rest of the family also moved to this city.

Mr. Dike had a common school education in Kansas and graduated from the Downey Grammar School.  At the Woodbury Business College, besides his business course, he studied short hand and typewriting.  After finishing his course of instruction in this school he was employed in the law office of Miner & Woodward and afterward in the office of Charles L. Batcheller, remaining in the latter position about a year.  His first employment in Redlands was in the office of the Bear Valley Irrigation Company.  He remained with this company from January 11, 1890 to September 1, 1895, at first acting as stenographer and typewriter for the company, and afterward as assistant bookkeeper.  October 1, 1895, he purchased a half interest in the Redlands Abstract and Title Company, and was for a year in partnership with A. M. Foster.  At the end of that time he purchased the remaining half interest and has since been sole proprietor of the business, although retaining the name by which it has always been known.  Mr. Foster has remained as a searcher of records.

The Redlands Abstract and Title Company was founded by A. M. Foster in 1893.  its first place of business was on the second floor of the Union Bank building.  Afterward it moved to the Phinney block, on Orange street, and later to its present location in the Baker block, at 304 Orange street.  It is prepared to make abstracts and certificates of title, or to perform any services in the way of searching records.  Its records cover Redlands, Mentone, Crafton, Highlands and the Barton Ranch.  It has in its files a complete record of all real estate transfers, changes, mortgages and other incumbrances within this territory.  These are carefully written up from day to day.  The preparing of abstracts is an occupation which requires great care, painstaking and systematic effort.  These qualities, with experience, insure accuracy.  Mr. Dike’s training was well qualified him for this occupation and he has taken care to secure the best available assistance.  A constantly growing business attests the fact that he has the confidence of a large circle of patrons.  This business is practically professional in its character and, under the California system of real estate transfers, is of very great importance.