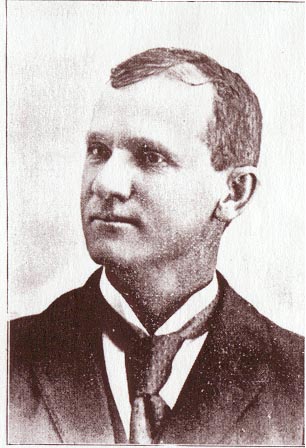 Among the very first purchasers of property after the preliminary map of Redlands was filed, in November, 1881, was James S. Edwards, who at that time was located in Riverside, where he was ranching and had arrived from Galesburg, Ill., in the previous April.  Mr. Edwards remained in Riverside until December, 1882, when he permanently located in Redlands.  He was born in Plymouth, Ill., April 14, 1857, where he lived with his parents upon a farm, and attended the common schools.  He graduated at Knox Academy, Galesburg, in 1878, and entered Knox College, but left in the spring of 1881 to go to Riverside, as above stated.  His first investments in Redlands were the present B. H. Jacobs and the J. W. A. Love places, which he at once improved.  Soon after arrival here he was appointed zanjero and secretary of the Redlands Water Company, and held these positions for four years.  In 1883, however, he had started in the nursery business, which he prosecuted alone until a partnership was formed with J. V. A. Love.  In March, 1886, W. N. Chamblin arrived, and another nursery business was commenced under the firm style of Edwards & Chamblin.  In the winter of 1889-1890 this firm erected a large warehouse, and began a general warehousing and fruit shipping business, while still continuing the nursery.  In March, 1891, Mr. Edwards sold his interest in the warehousing business to Mr. Chamblin, but the nursery partnerships with Mr. Chamblin and Mr. Love were continued some months afterward.

Since 1893, Mr. Edwards has been developing his various properties, notably the one on Cajon street, where in 1890 he erected a fine residence.  He also has been extensively engaged in ranching in East Highlands, where his is superintendent of the East Highlands Orange Company.  Mr. Edwards is also a director in the Redlands Fruit Association, and has been secretary and superintendent of the Hillside Cemetery Association since it was organized, July 7, 1886.  He was for several years one of the directors of the First National Bank and one of the original stockholders, and was secretary of the first fruit association formed in this city.  He is a strong prohibitionist, and was for nine years superintendent of the Sabbath School of the First Congregational Church, of which he is a member.  In August, 1887, he was married to Mrs. Alice Pratt, of Rochester, N.Y., where the wedding took place.  They have three children, a daughter, Ruth, and two sons, Paul and Russell.