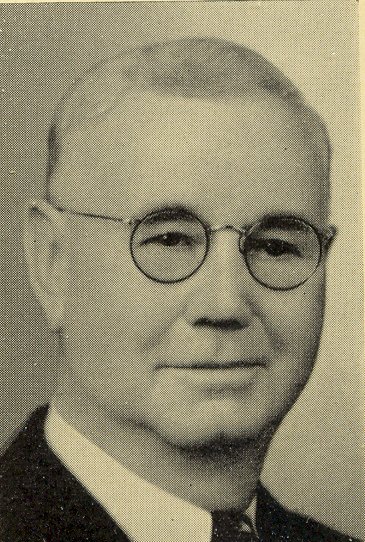 RICHARD J. FARQUHAR, prominent orange grower, is a member of one of the pioneer families of Crafton. In 1886, his mother, his brother Frank, and his sister Ida, came to Riverside for his mother’s health. One year after they arrived, in 1887, the Crafton section was opened for settlement. The family moved there and laid out 10 acres of fruit on Fifth avenue and Walnut, the first oranges ever set out in this section. This original 10 acres is still in the possession of Miss Ida Farquhar today.

Water was obtained by plowing a ditch to connect with the Crafton ditch at Fifth ave­nue. Four buds were obtained from the or­iginal navel orange tree in Riverside, and the remainder of the nursery stock ordered from Florida.

Richard J. Farquhar was born in Coshocton County, Ohio, raised on a farm, and attended a district school. He joined the family in California in 1889, arriving in Redlands on Nov. 24, after traveling across the country during a bitter cold spell and viewing frozen cattle all along the route. This pleasant val­ley, after such an experience, seemed a verita­ble paradise.

Entering the family’s horticultural activi­ties, Mr. Farquhar soon acquired 10 acres of his own and set it to oranges. For some time, then, he and Frank Farquhar did general con­tracting in grove work, grading land and building flumes and setting out acreage for such early-day orange growers as the Spoor, Woolverton and Conklin families. They also operated their own nursery in connection. A portion of the labor employed were Chinese.

At the end of four years, Mr. Farquhar went back to Ohio, settled his affairs there, and returned to make his permanent home in Redlands. Gradually he acquired more and more orange acreage until at one time he owned over 100 acres.

On Feb. 1, 1899, Mr. Farquhar was mar­ried to Katherine Glann in Toledo, Ohio, and brought her to Redlands on their honeymoon trip. It was then that he built the part-adobe home at Fifth avenue and Opal in which his son, D. Glann Farquhar and family live to­day. Indians from the Indian village then existing in Mentone made the adobe bricks med in the dwelling, and also supplied Mrs. Farquhar with household help.

In this Fifth avenue home the Farquhars lived for 28 years, and in it all of their chil­dren were born. In 1927 they had built the attractive Spanish type home at 203 West Cypress avenue in which they live today.

In addition to David Glann, who is mar­ried and the father of four boys, Mr. and Mrs. Farquhar are parents of Mildred, now Mrs. G. W. Alexander of Parkridge, N. J., mother of three girls; Eleanor, now Mrs. J. M. Askey of Los Angeles, mother of one girl; Richard, who is married, makes his home in Crafton and is the father of a daughter; and Donald, a student at Davis Agricultural col­lege, who lives at home.

Mr. Farquhar has been prominent in pack­ing house activities through the years of his residence here. He and all the members of his family are active in the work of the First Presbyterian church.