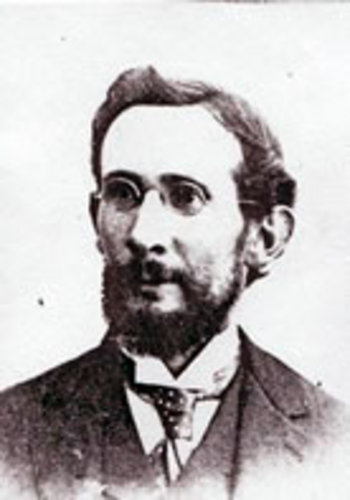 Isaac Ford, whose life spanned the entire history of Redlands, died quietly in his sleep this morning. A man who came here in 1884 with a life expectancy of six months, he celebrated his 96th birthday last November 20. During his 75 years in Redlands, he became a part of the history of the community through his many activities in behalf of the town he served so well. An early believer in orderly development, he had served on the Planning Commission continuously from 1928 until last December when his health finally forced him to step down. His final thought even then was for the community, “Keep Redlands as beautiful as it has been for 75 years,” he pleaded.

Mr. Ford, born in Philadelphia, November 20, 1862, attended public schools there and later attended the University of Pennsylvania for a course in civil engineering. Ill health forced him to leave college and brought him to Redlands where he quickly regained his health and gained his affection for Redlands. Taking up engineering again, he made early surveys of Bear Valley reservoir but returned to the valley to take up his life’s work in engineering and subdivision development. In 1886 he planted the 10 acre orange grove on the southwest corner of San Mateo and Cypress and employed D. M. Donald to building his present home on the site in 1891. 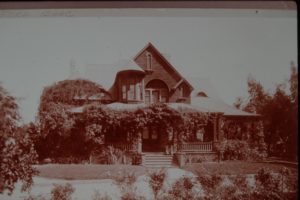 He also started his Ford’s snowline orchard in Oak Glen in 1899 with a 60-acre planting of apples. He laid out the Oak Glen subdivision and was active in early water negotiations for that area. He surveyed the first road into Oak Glen from Yucaipa and the original road to Beaumont. He was also Redlands’ first city engineer, appointed to the position Dec. 20, 1888, less than a month after Redlands was incorporated. Apart from his professional life, he served as one of the first trustees of the University of Redlands and assisted in laying out and landscaping the grounds in 1909.

A charter member of the First Baptist Church, he served as one of its first Deacons and was a trustee for 30 years. As a hobby he studied colorful shrubs and trees suitable for planning in Redlands and other parts of Southern California, and until a few years ago often sat with the Park Commission in an advisory capacity.

His civic activities over the years brought him many honors. He was awarded the coveted Grail Award by the Knights of the Round Table by the Knights of the Round Table in 1939 and the Elks Civic Award in 1957 for outstanding community service. The Community Board of Trade also honored him for meritorious service in the field of agriculture at a ceremony in 1956. Mr. Ford became a member and president of the Kings of the Round Table in the 1940’s, was an honorary life member of the Redlands Chamber of Commerce and was active for many years in the Fortnightly Club. 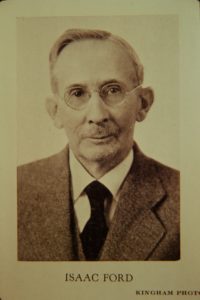 Although Mr. Ford had fought his way back to health from several serious illnesses in the past, he suffered a stroke several months ago which led to his death. Funeral services will be held, Friday at 3 p.m. from the First Baptist Church with Rev. Frank B. Fagerburg, pastor, officiating. Interment will be in Hillside cemetery, F. Arthur Cortner Chapel in charge.

The family has suggested that those who wish may make contributions to a Memorial Fund to be used for purchase of shrubs and trees for planting in Redlands parks and parkways. Contributions may be left with Dan McLeod at the Bank of America.

Perhaps a comment by Edwin R. Hales, chairman of the Planning Commission, at the time of Mr. Ford’s retirement will be repeated throughout the community today by those whose lives Mr. Ford had touched. “Each of us has been guided by your thinking – we’ll miss you.” 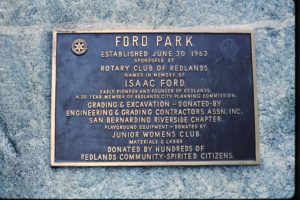