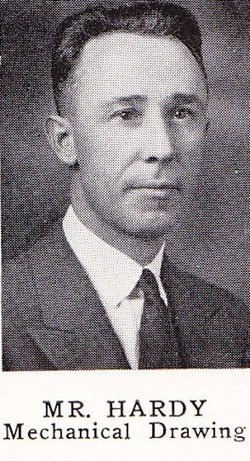 A pioneer in education and resident of Redlands for 72 years, Clarence W. Hardy, 98, died here April 15. He was born in Pentwater, Michigan, Jan. 1, 1884. Hardy was a teacher for 43 years, 39 of them at Redlands High School. He introduced the first summer school class in Redlands in addition, he taught night school in the district for many years and held weekly classes in Yucaipa and other areas.

The present industrial arts building, completed in 1950, was dedicated to Hardy and bears the name “Clarence W. Hardy Industrial Building.” The architect for the building was Herbert C. Powell, a student of Hardy when he attended Redlands High School. Hardy was a longtime member of the First Congregational Church of Redlands. In addition, he was a member of the Redlands Elks Lodge and a director of Redlands Federal Savings and Loan from 1937 to 1967. He joined the Elks Lodge in 1912.

Survivors include two sons, Dr. Richard C. Hardy and William T. Hardy, both of Redlands; two daughters, Coramaye Goble of Apple Valley and Alice Sally Wirth of Redlands; 11 grandchildren; and 14 great grandchildren. Services will be a 2 p.m. Wednesday at the Chapel off the Grail, First Congregational Church in Redlands, Dr. Lowell Linden, pastor of the First Congregational Church, will conduct the service. Private entombment will be at Hillside Memorial Park.

The family suggests that friends who wish may make memorial contributions in his name to the Redlands Community Hospital Building Fund, 350 Terracina Blvd. or to Plymouth Village, 900 Salem Dr., Redlands.