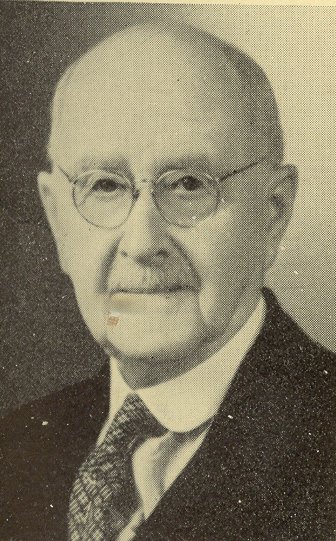 A real old-timer of this community and one of its pioneer merchants is Benton O. Johnson, who came here in 1883, lived for 23 years during the most stirring times in Redlands’ history and now makes his home in Los Angeles.

Mr. Johnson was born in Bethlehem, Conn., on April 20, 1855, and attended school in West Haven, Conn. In 1881, he was married to Minnie Brown, sister of Frank E. Brown, one of the founders of Redlands.

Two years later, Mr. and Mrs. Johnson came West, arriving in Colton on April 9, 1883, and coming over to this community. For some time they made their home with Mrs. Johnson’s mother, Mrs. R. W. Brown, on North place, in a home built by her in 1882 and still standing as originally built today. Later Mr. Johnson built a home of his own on the corner of Palm Avenue and Center Street. Other houses constructed by him were the first E. M. Lyon home and a residence at 52 Summit Avenue.

Mr. Johnson worked for Frank E. Brown measuring water prior to the building of the Bear Valley dam, and later had charge of the camp during construction of the dam. In June, 1887, he bought the George A. Cook store at Orange Street and The Terrace, which he later moved to the corner of Orange and State streets.

In 1876 Mr. Johnson joined the Annawan Lodge No. 115, West Haven, Conn., and at the first meeting of Redlands lodge, F. and A. M., held on Monday, March 31, 1890, application for affiliation in the Redlands lodge was received. He has been a member of the Masonic lodge for over 62 years.

In 1906 he moved to Los Angeles, where he was associated for a time in the real estate and telephone business with E. G. Judson and George B. Ellis. At present, he is with the Lomita Land & Water Co., and makes his home at 1515 1/2 South Wilton place, Los An­geles.

The late Hazel Johnson Hobbs, daughter of Mr. and Mrs. Johnson, was the first white baby born in the city of Redlands.

Their only son, Walter Butler Johnson, well known business man of the city, was born in Redlands, attended Kingsbury and Redlands high schools, being graduated from the latter in 1905. In 1906 he entered the employ of the Savings Bank of Redlands as cashier, continuing in this occupation until 1919, when he resigned and entered the stock and bond brokerage business in the Fisher building, where he still maintains his office. In 1923 he was married to Emily Ethel Irwin of Louisville, Ky. Their home is at 345 Summit avenue.