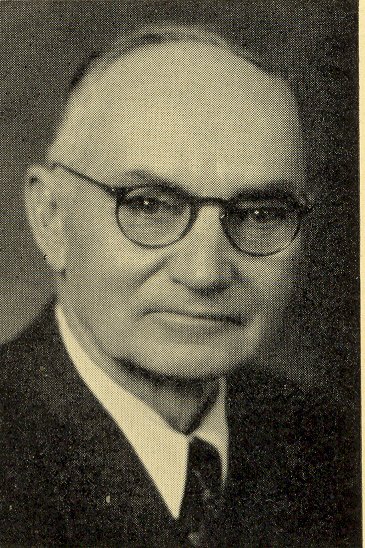 PROMINENT for half a century in agricultural and commercial interests of the San Bernardino valley, Julius D. Langford today is among the front-rank Redlands or­ange growers. He also owns and operates the Antlers hotel, foremost San Bernardino hos­telry.

Until recently active manager of the Crown Jewel association, Mr. Langford was outstand­ing in California as a fruit packer and ship­per. Before he withdrew from the California Fruit Growers exchange to market through the American Fruit Growers, he was the Red­lands- Highland director on the governing board of the world’s largest citrus cooperative.

Born in West Virginia, Langford spent his boyhood in Missouri, borrowed $100 to come to California and had $3 left when he arrived March 26, 1888. He spent the remainder of that year as a farm hand on the Raynor place near San Bernardino.

On a trip to Kansas he married Ida L. Mc­Reynolds, returned to California and settled in Highland, where he spent the following 16 years, most of his employment being in the orange industry. His start was with the Dodd Dwyer orange nursery on the present site of the Patton state hospital. In 1890 he bought his first acreage, 2Yz acres near the Santa Fe station in Highland, and planted oranges.

For two years he was in charge of the saw­mill of the Highland Lumber Co. at Fredalba Park. Then he became receiver and general manager of the Norris and Young orange ranches in East Highlands, which were sold later to C. A. Sherrod and H. M. Olney with Langford retained as manager. His next af­filiation was with H. H. Linville as nursery superintendent and salesman. At that time he began speculating in the buying and ship­ping of oranges. After three years he turned his entire time and attention to the productive end of the industry, a line in which his talents and energies have been displayed successfully.

In 1905 Mr. Langford joined with Arthur Gregory in laying out, grading and planting 205 acres of oranges in the Williams tract northwest of Redlands. This project was under Langford’s personal supervision and was conducted under the name of the Redlands Security Co., a corporation, with Gregory and Langford as half owners. The partners also bought 418 acres southwest of Colton from the Riverside Highland Water Co. A begin­ning of a peach plantation had been made and they continued the planting of this fruit. They contracted with the city of San Bernar­dino to take sewage water for 25 years, built a pipeline to the ranch and operated under the name of the Delta Water Co. with Lang­ford as president.

Langford and Gregory in 1909 purchased the now famous Carlsbad Caverns in New Mexico. They organized the Carlsbad Guano & Fertilizer Co., with Langford as president and manager, and from the present national park they shipped guano to their fertilizer plant in Redlands.

After selling his fertilizer business and his interest in the Delta Water Co., Langford moved to San Francisco in 1911 and engaged in the wholesale fruit brokerage business. In 1914 he formed the company of Langford, Bacon & Meyers as a machinery business, which dealt in locomotives, steam cranes, power shovels and a general line of heavy machinery and trucks. This venture having proved unprofitable, he returned to Redlands and was named general manager of the Crown Jewel association. There he remained from October, 1916 to 1937.

In 1912 Langford and Gregory divided their holdings in the Williams tract. The for­mer incorporated his business under J. D. Langford & Co., which today operates 358 acres of oranges in the Mission district and East Highlands, besides the Antlers hotel and Antlers garage in San Bernardino. Mr. Lang­ford today gives his entire time to these in­terests.

Mr. Langford’s wife died in 1936. His son, J. Roy Langford, is associated with him in the orange industry, residing in Redlands with his wife, Marguerite. A daughter, Gladys Langford Pate, also lives in Redlands and is the wife of Milton Pate, manager of the Chal­lenge creamery in San Bernardino. Mr. Lang­ford’s granddaughter, Lucile Langford Gates, is the daughter of C. Paul Langford, who died in 1931. She and her husband, John E. Gates, reside in Hollywood.