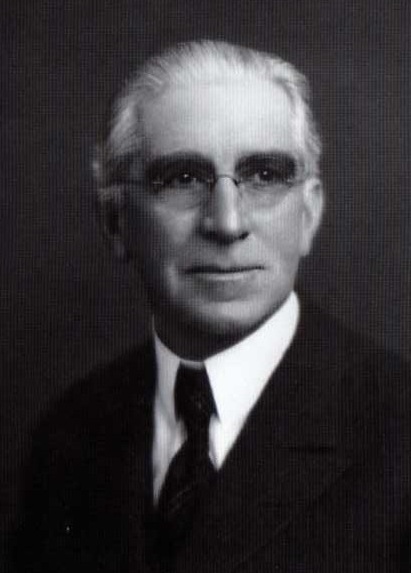 Another stalwart pioneer of the citrus industry in Southern California, a man who had been keenly interested in its development since 1892, died at his home on Summit Avenue (1225 Cajon Street) late Saturday night. Eldridge Merick Lyon succumbing in an illness of many months. Death was not unexpected since his condition had been precarious for many weeks. He was almost 82 years old. Philanthropist, capitalist, clubman and orange grower, he had for many years been a citizen of all Southern California, as well as an outstanding resident and friend of Redlands.  Keen business man, and also a man of great vision, he was active in many developments in the south and the city of his choice.

Eldridge M. Lyon was a philanthropist who sought always to keep his good deeds secret. For many years he served as president of the Associated Charities, and gave that organization the present home on Vine Street. He gave to the city of Redlands without stint in the work of the library, one wing and a large part of the stack wing. For years he was head of the work of the American Red Cross here, and was active in the raising of funds for building the Redlands Community hospital. For many years he had been a trustee of the A.K. Smiley library, and his keen interest in that “university of the people” helped to make it one of the outstanding institutions of the south.

For over 40 years he has been keenly interested in the citrus industry. As a young man, he was educated for the law, graduating from Yale University in the class of 1874, and while he was admitted to practice in Michigan, he preferred business life. For several years he was interested with his father, Isaac L. Lyon (1822-1901) and brother, Leland Lyon (1857-1901), in the lumber business in Michigan and remained there, except for frequent visits to Redlands, after they came here to plant groves and establish the I.L. Lyon & Sons packing house and orange groves. In 1892, and every years thereafter, he spent some months here, and finally, in 1897, brought his family to Redlands to live, his wife at the time being the former Clara S. Grout, Detroit, who died in 1901. In 1907 he married Mabel deColston Salter, New York.

I.L. Lyon and Leland Lyon died in 1901. Since that time Mr. Lyon had charge of the vast citrus and other business of the family. For years he was director of the Redlands National Bank, Union Savings Bank, member of the California Reserve Bank board, president of the Redlands Yucaipa Land Company, stockholder of Brock & Co., jewelers, of Los Angeles, president of the California Citrus League, president of the Bear Valley Mutual Water Company, interested in large paper companies in Wisconsin, and many other business enterprises.

Eldridge M. Lyon was a good citizen of Redlands, interested in its cultural growth, particularly. He was a good citizen of Southern California, in that for years he took a most active interest, as an independent grower, in the betterment of the citrus industry. He made many trips to Washington, appearing before the Interstate Commerce Commission and other bodies relative to rates and other things of moment to the industry. He was looked on as a leader in the industry.

Mr. Lyon had been in failing health for some time, with a heart ailment, and it was known his end was not far away. He leaves his widow, Mabel S. Lyon; two daughters, Mrs. Donald C. Scott and Mrs. Sidney L. Lasell, Pasadena, and four grandchildren, Alex Lyon Scott, Eldridge Lyon Lasell, Jr. and Ethel Lasell.

Mr. Lyon contributed to the Lyon wing of the A.K. Smiley Public Library which was dedicated in 1926.