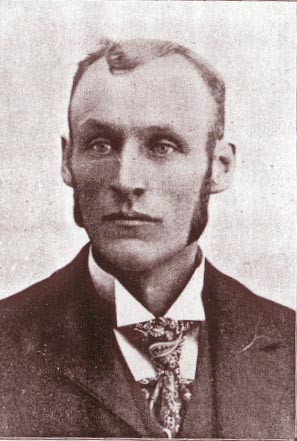 John McIntosh is a native of Boston, Mass.  He came to San Francisco in 1881, and was married in that city to Miss Harriet Jones, a native Californian.  In 1886 they came to Redlands and since resided in this city.

Mr. McIntosh had followed blacksmithing and carriage building in the East, and, not long after his arrival in Redlands, he opened a shop here.  At that time there were two shops here, one of which, Mr. Schyff’s, Mr. McIntosh bought out.  A year later he built a shop for himself on the corner of Orange street and Citrus Avenue.  He moved to his present location on Citrus avenue, west of Cajon street, about four years ago.

Mr. McIntosh’s establishment is always a busy place during working hours.  He does a great deal of horseshoeing and general blacksmithing and in addition makes surries, carriages, wagons and buggies to order.  Mr. McIntosh is himself a thorough workman and always employs the most competent assistants obtainable.  The result is a reputation second to no other in manufacturing a class of goods that depends for its value upon honesty in material and workmanship.