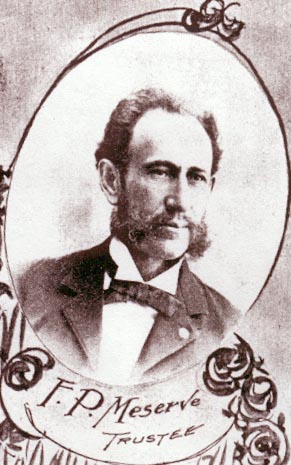 When Frank Pierce Meserve sold his active interest, a few months ago, in the Meserve Clothing House, he was among the oldest continuous residents in business in Redlands.  When he came to Redlands, in September, 1888, he had been for 17 years in the clothing business at Newport, New Hampshire, in which state he was born, November 30, 1852.  His successful career there was followed by an equally successful one here.  Commencing in what was then a barber shop, next to the post office, he enlarged his place of business four times, the most important change being into the handsome Sanborn-Meserve block, and increased his stock ten times.  When he arrived at Redlands Mr. Meserve occupied the only vacant house in town, a little cottage on Highland Avenue, but he soon built an attractive residence on Cypress avenue, where he has since lived.

Mr. Meserve was a member of the Board of Trustees for four years from April, 1890.  He was one of the originators of the public library and member of the first board of trustees; has been a director in the Union bank; a promoter, director and stockholder in the Redlands Electric Light and Power Company and in the Redlands Preserving Company.  He was one of the building committee of five, who supervised the construction of the Casa Loma hotel and the expenditure of the $20,000 bonus raised by the citizens of Redlands.  Mr. Meserve was the first master of the Masonic lodge and is a member of nearly all the secret societies in Redlands.  He is a 32d degree Mason; has been a member of nine different lodges of that order, and is among its most enthusiastic supporters in this city.  May 15, 1878, he was married to Miss Minnie A. Harvey, of Newport, N. H.  They have no children.