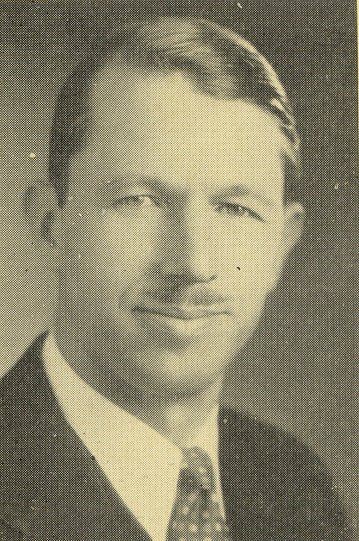 LETTERS COME from strange lands – Singapore and Java – Africa and the Orient – Letters with queer writing and with amaz­ing stamps on the envelopes – to the office of Frank P. Mitten, of Redlands, Calif. It’s the age-old industrial success story that not only surprised his family and the towns­people, but himself as well.

Oddly enough his early training was not along industrial or mechanical lines; he ma­jored in music at the University of Idaho, of which he is an enthusiastic alumnus. While in the university, Frank was active in student affairs and a member of Lambda Chi Alpha. Following his graduation he studied in the American Conservatory in Chicago. Upon the completion of his work there he came west to join his father and mother, Frank S. and Mary Mitten, in establishing Mitten’s Foun­tain at 11 East State street, in Redlands.

As an outgrowth of his promotional ideas, Frank conceived the idea of making third di­mensional letters out of composition tile to be used on signs, in such a manner that they might be used again and again, just as a printer uses his font of type. After the fountain was closed at 11 o’clock at night he got out his paraphernalia and “burned the midnight oil” planning and ex­perimenting with his idea. For it is one thing to get an idea and a far different one to make it a practical, saleable commodity, and for three discouraging years Frank Mitten strug­gled against what seemed to be insurmount­able difficulties.

Just when Mitten’s idea was taking tangib1e form, an almost fatal auto accident postponed work on the project and for a while, it seemed that the whole plan would have to be abandoned. But in less than a year the first letters were placed on the market. As the business showed its first signs of growing and orders began to pour in, compe­tent designers were selected to create new type faces. Today, the comp1ete line delights not only the practical business man but the artist as well.

Not the least of his troubles was securing suitable pins for use in mounting the letters. For two years he was compelled to get these from Germany, but now has a superior pin made in America. From a small storeroom, it was a matter of months until it was necessary to move to larger quarters. Today Mitten owns a modern plant of 10,000 square feet of floor space, which houses the unique and exclusive ma­chines that are necessary for the manufacture of his amazing new products. Most of the equipment is of original design, being the brain children of its owner. To the lover of unique machines, this plant is an inspiration for mechanical inventiveness.

Seventeen employees run the factory at ca­pacity, and in every large market in the Unit­ed States and throughout the world, there is a sales representative. Accepted by business as a compelling sales help, Mitten’s Letters recently broke into the movies under the assumed name of Mitten’s Titlers. Many large studios have used the let­ters in making titles for their recent pictures.