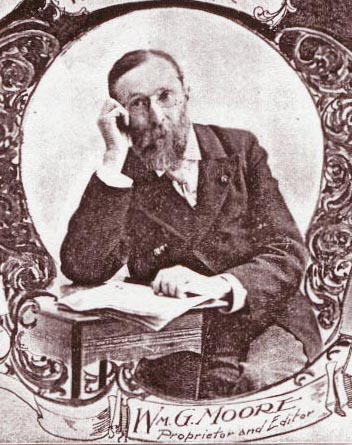 Born May 1, 1841, in Womelsdorf, Pa., where his father, who was of Scotch-Irish descent, a pious man forward in all good works, a graduate of the University of Pennsylvania, practiced medicine for thirty-three years, ending with his sudden demise in 1872.  His mother, a consescrated woman full of quiet charitable deeds, died in 1860.  Walker Stephen, a noted educator of the children of four generations, taught the lad in his early years.  At the age of 10 he was placed in the Womelsdorf Union Academy, afterward attending both public and private schools in Reading, Stouchsburg Academy and Bolmars Academy, a famous institution of West Chester, Pa.  Taught a district school in 1858.  Whilst engaged in the study of medicine in 1861 he, at President Lincoln’s first call for troops, led off in organizing a volunteer company, of which the boys elected him second lieutenant.  The company was mustered into the United States service April 24, 1861, assigned to the Fourteenth Pennsylvania regiment, and served under General Patterson until their discharge at Carlisle, Pa., August 16, 1861.  He next took a course at Crittenden’s Philadelphia Commercial College.  In 1862, however, his earnest patriotism led him to raise a number of recruits for the Fifty-fifth Pennsylvania regiment, which was stationed at Beaufort, S. C.  Governor Curtin commissioned him as second lieutenant of Company D of this regiment, and in October of that year, in charge of these men, together with a large number of recruits for various other regiments, he embarked on a steamer at New York, and after a stormy passage of five days delivered them safely at Hilton Head, S. C.

Was promoted to first lieutenant July 1, 1863, and to captain October 23, 1861, and was present at all of this noted regiment’s numerous engagements in Virginia, save from May 18, 1864, until October of that year.  Having been shot thorough the left arm at Chapin’s Farm, Va., May 18, he was unfitted for duty during that period.  His regimental officers having been captured May 16 at Drury’s Bluff, Va., and held in southern prisons (the Colonel being placed under the fire of our guns part of the time at Charleston, S. C.), and not exchanged until near the close of the war, prevented Captain Moore, who had been second and at times first in command of his regiment, during the winter of 1864-1865, including the long series of engagements of the Army of the James, ending with the surrender at Appomattox, from receiving well-earned promotion.

While in camp near Richmond, Va., in May 1865, he was granted a twenty days’ leave of absence, when he proceeded to Lincoln, Ill., where he was married to Elmira Seltzer, a resident of his old home, who was then on a visit to her sister at that place.  Returning to Camp Hollywood near Richmond, he was honorably mustered out of the service June 11,1865, the war then being virtually over.  During the prosperous times following the war there arose a large demand for Kentucky mules in Pennsylvania and surrounding states.  The firm of Sletzer & Moore was established, William G. Moore subsequently assuming entire charge of the business, which is now under the superintendence of his son, W. M. S. Moore, and during this period of thirty-one years they have handled thousands of mules and horses.

The people of his native town and county have frequently honored him by election to town and county offices, among which was county commissioner, to which he was elected in 1875 for a term of three years, having been the first Republican and youngest man elected to that responsible position in Berks county.  He was a delegate to the National Republican Convention at Philadelphia in 1872, when Grant was re-nominated, and an alternate delegate at the Chicago convention, 1888, when Harrison was nominated.

Was president of the Berks County Agricultural and Horticultural Society; also of the Berks and Dauphin Turnpike Road Company, this being a toll road forty two and one-fourth miles ling, with a capital stock of $100,000; a director of the Farmer’ National Bank, the Manatawny Fire and Storm Insurance Company, and treasurer of the Morgan-Ruth-Moore Paint Company – all of Reading, Pa.  His is a past master of Williamson Lodge No. 307, F. & A.M.; companion No. 6467, First-class Military Order of the Loyal Legion of the United States, Commandery of Pennsylvania; a member of Bear Valley Post No. 62, G.A. R., and of Redlands Lodge No. 300, F. & A. M., and was for may years superintendent of the Womelsdorf Union Sunday School

A violent attack of la grippe in 1890, caused a hemorrhage which developed into lung trouble, and in February, 1893, accompanied by an only daughter, May C. Moore, he came to California to try the effects of its noted climate.  Arrived in Redlands in June.  He improved somewhat in health, and concluded to make this his future home.  Soon tiring of any inactive life, he on August 1 bought the DAILY FACTS plant, and assumed its management.  Purchased the property, No. 316 Cajon street, into which he moved January 1, 1896.  Mrs. Moore, who had remained at the old home caring for her invalid father until his death in February, ’96, arrived here the following April and in July, 1897, the youngest son, Paul W. Moore, joined the family of three here, and is now bookkeeper and cashier of the FACTS office.  The oldest son, W. M. S. Moore, occupied the old home, now the property of Mrs. Wm. G. Moore, where he owns a large general store; also superintending his father’s farm and other business.  He succeeded his father as president of the B. & D. Turnpike Co.  He is married and has one child, Mary Esther Moore.  Of a family of six children, of which Wm. G. is the oldest, but one beside himself, Thomas P. Moore, a successful business man of Reading, Pa. survives.