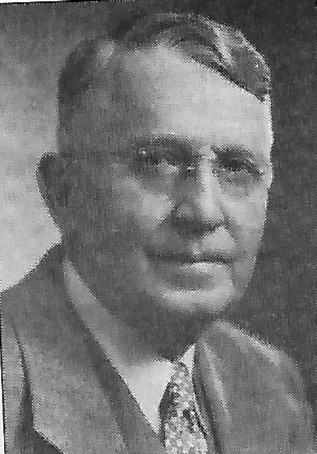 Paul W. Moore, 66, editor and publisher of The Facts and a leader in the public affairs of Redlands for more than 40 years, died early today at his home, 751 West Highland Avenue, from the effects of a heart attack which he suffered 10 days ago. Engaged in the publication of the newspaper from the week of his arrival here in 1897, until illness April 11, he had a part in the making of some 13,500 issues of The Facts. Through his long career in the publishing business, through his membership in many organizations and from his friendly manner to all, he probably knew more Redlands people, in all walks of life than does any man.

Lucretia E. Moore, his wife and four children survive. They are Mrs. Lewis G. Murray-Kidd of Shanghai, currently of 751 West Highland Avenue; William G. and Frank E. Moore who have been associated with their father in the Facts; and Thomas Moore of Rio de Janeiro, and four grandchildren. Funeral services will be held Thursday afternoon at 4 o’clock from Trinity Episcopal Church, Rev. George Barnes, the pastor, officiating.

The story of Paul W. Moore, to a very large degree, is the story of The Facts. With a rare singleness of purpose he devoted his vocational interest to it during his entire adult life. The paper was a part of him. He started to learn about the business the day after his arrival in Redlands in July, 1897. He came here from Womelsdorf, a small town in the Pennsylvania Dutch country, following his father, Capt. William G. Moore, who had come here a few years earlier and purchased The Facts. Going about the matter of familiarizing himself with the business with characteristic thoroughness, he took a hand at each job for a spell. There were no delivery boys then and he carried the copies to the Post Office where the clerks distributed them in the boxes of the subscribers. That was before the day of linotypes. He learned the printer’s case, which is to say, how to set type by hand. He kept books and solicited advertising.

In October, 1897, he became the business manager and held that position until 1929 when he became editor and publisher. He held that title until his death.  Mr. Moore, singularly enough for a man in his calling, was not a writer. He wrote not more than a dozen editorials all told and seldom did he turn in a story of his own composition. Business management, making the plant go, was his job. While it is true that he was not a writer, the paper accurately reflected his views. He closely supervised its editorial policies. Among his strongest principles were the advocacy of prohibition, support of the Republican party, and the advancement of Redlands by whatever means opportunity presented.

For 18 years, from 1911 to 1929, Lyman M. King shared in the ownership of the Facts with the Moore family and was the editor. He sold back his interest 13 years ago so that he might give his full time to the Redlands Building and Loan Association, now the Redlands Federal Savings and Loan association, of which he is the president. Entering into the life of the community promptly after his arrival, Mr. Moore joined many civic and fraternal organizations and helped to form several new ones. Although he talked little of abstract principles he was ever engaged in the democratic way of life – the promotion of the common welfare through cooperative effort.

He held a sincere, almost affectionate interest in the City of Redlands which he channeled into the Chamber of Commerce from the very start of that organization. In the early days he was the president for a term. Later he served on the board of directors many times. Ten years ago, when the Chamber of Commerce was in the doldrums of the depression, he was one of the stalwarts who helped to see it though.

Christmas and Easter, he felt should bring joy to all of the people. He started the Community Christmas tree services which were held at the Triangle near what is now Cajon and Citrus for 27 years. He was also instrumental in organizing the Easter sunrise services and was a stout supporter of the Redlands Bowl during its formative years. He was also interested in preserving historical materials and was instrumental in the restoration of the Asistencia.

Mr. Moore was one of the organizers of the Country Club, and a member of the University club, Rotary Club, Elks Club, and was a Mason. He was always interested in the politics at the city, county, state and national levels. He never sought or accepted political appointment, although he served county and state central committees at various times.