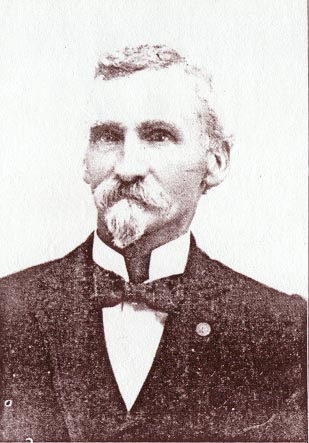 Thomas B. Reeder was born in La Salle County, Ill., Sept 14, 1843, of French descent.  His first ancestor in America came to this country as an officer with Lafayette during the Revolutionary War, and his father served during the Black Hawk Indian War.  At the commencement of the Civil Way he enlisted in the Union Army, and served four years as a member of Co. A., 10th Kansas, Vet. Vol. Inf.  His regiment was on the western frontier a great portion of the war and was noted for its efficiency in skirmish and advance guard duty.  Mr. Reeder was in the battles of Prairie Grove, Ark, and Nashville and Franklin, Tenn.  He also took part in the engagements which resulted in the capture of Mobile at the close of the war.  Among these were the fights at Spanish Fort, April 8, 1865, and at Blakely, the last key to Mobile, the following day.  In the latter engagement, Mr. Reeder’s regiment by a bayonet charge captured a three-gun battery and 650 Confederates, who were entrenched behind breastworks.

Mr. Reeder lived for several years at Uniontown, Kansas, having been one of the original town company of that place.  He was married there Sept. 1st, 1872, to Mattie Orvings.  In 1869 he made an overland journey across the plains, fighting Indians on the way.  April 19, 1887, he moved to San Diego, California, and in January 1889, came to Redlands, where he has since resided and has followed his trade as a carpenter.  Mr. Reeder was a charter member of James Montgomery Post, No. 154, G. A. R., at Uniontown, and of Marion Lodge, A. O. U. W., and Excelsior Lodge, F. & A. M., of the same place.  He is at present an active member and an officer in each of the following orders in Redlands: Redlands Lodge, No. 300, F. & A. M.; Redlands Chapter, No. 77, R. A. M.; Delta Lodge of Perfection, A. & A. Scottish Rite and Copa Del Ora Lodge, O. E. S.