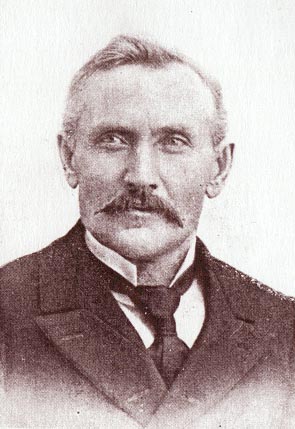 Charles G. Rohrer, proprietor of the largest furniture and carpet establishment in Redlands and in San Bernardino county, was born at the free city of Asch, on the German border of Austria, March 15, 1843.  His father being a merchant manufacturer, he was taught the rules of mercantile business from a very early age, but when 17 years old came to America to seek his fortune in the New World.  After a brief residence in Buffalo, N. Y., he went south to Vicksburg, Miss., in 1860, where he had two brothers living, and, not being willing to part with his love for Union and swear allegiance to the Confederacy, he experienced three years of severe trials.  Some time after the surrender of Vicksburg Mr. Rohrer commenced business for himself in that city as a dealer in groceries, in which business he was very prosperous.  But finding himself in need of an English education he went to Carthage, Ill., where his mother resided, and attended the high school there.  After leaving school he engaged in business in Carthage as a dealer in paints, wallpaper, carpets and furniture, and remained in this business until he came to California for the first time, arriving July 7, 1892.

Returning to Carthage Mr. Rohrer sold his business interests there, and came back to Redlands January 13, 1893.  A month later his family joined him here, and, after assuring himself, by visiting the best towns in Southern California, that Redlands was the best business location, as well as the best residence town in this section, he identified himself permanently with this city by purchasing the block now occupied the DAILY FACTS, and made other real estate investments.  Two years later he bought the furniture and undertaking establishment owned by Henry Fuller & Co., and at that time managed by G. M. Adams.

Mr. Rohrer’s business experience in Redlands has fully answered his anticipations, and he now says that he would not exchange Redlands as a business point for any town of its size in the United States.  During the recent widespread business depression he went East, and found commercial affairs so much worse in other places that he was fully satisfied with the conditions as they existed at Redlands.  Having been thirty years in business in one city, he firmly believes that a rolling stone does not gather any moss.

Mr. Rohrer now devotes his entire attention to the furniture and house-furnishing branch of his business, and carries a most complete assortment of everything needed in his line.  His stock is the largest in the county.  His trade is not confined to Redlands, but San Bernardino, Colton, Riverside and Ontario all contribute to make up the volume of his sales.  His success in this city proves the assertion, often made, that the people of Redlands will support a home establishment by preference if it is up to the times, progressive and conducted on energetic business principles.

Mr. Rohrer was married November 22, 1871, at Carthage, Ill., to Miss Kate L. Detwiler, of that city.  They have two living children, W. L. Rohrer and Ralph G. Rohrer, the latter now in business in Redlands.